VTT Technical Research Centre of Finland has developed a series of new mid-infrared spectrometers, which have been integrated into compact gas sensors, branded as “GasSensors”.

The spectrometers are based on MEMS-tunable Fabry-Perot filter spectral sensors. The first demonstrator sensors, which were shown recently at BiOS and Photonics West in San Francisco, are now available for detecting and analyzing low levels of hydrocarbon gases in the spectrum between 3 and 3.7 microns.

Gases such as methane and other short-chain alkanes, as well as ethylene, ethanol and propylene can be precisely analyzed with the sensors, which measure just 77x38x25 mm and weigh 95g.

"Our new GasSensor overcomes this by utilizing full spectral information. Its specificity can be improved by a factor of five compared to current gas sensing products." 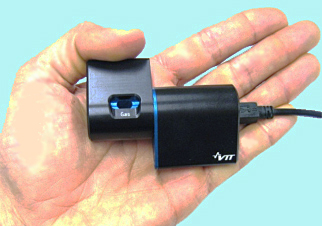 The compact GasSensor is claimed to be insensitive to drift.

Another problem with conventional sensors is their relatively unreliable long term stability, which can cause false alarms in their intended safety and security applications, such ads in factories and chemical refineries.

The GasSensor is claimed to be insensitive to drift due to its simple optical design and built-in self-referencing capability. VTT adds that the platform is now ready to be deployed for offline measurements and can also be ruggedized for both down-hole and handheld applications.

Highlighted features of the gas sensor include: a compact, hand-held design, USB2.0 connectivity (also for power supply); simple reconfiguration for analyzing both liquid or solid samples, a wavelength range from 3000-3700 nm, a spectral resolution of 50-60 nm and an optical path length up to 1.5 cm.

The GasSensor has a power consumption under 2 W and runs on LabView software.

VTT, a not-for-profit organization, is a part of the Finnish innovation system under the management of Finland’s Ministry of Employment and the Economy. The organization is the largest multi-technological applied research organization in Northern Europe; turnover in 2011 was €278 million and it employs  2,818  personnel.