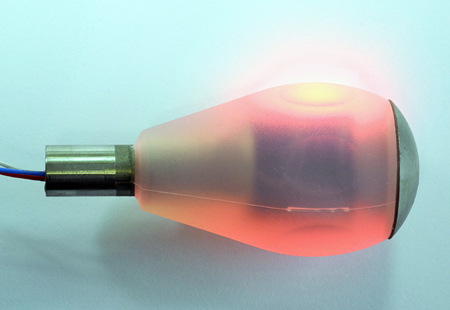 Kinder cuts: LED informs surgeon that his work is done.

Surgeons must operate with absolute precision; the handling of surgical tools requires the utmost sensitivity. Specialists need to answer such questions as, how deep have I turned a retaining screw into a bone? Have I applied the correct force in a critical operation?

Until now, they only had their pure instinct and their experience to rely on. Yet soon, a vulcanized instrument handle, designed so that surgical tools – such as screwdrivers or spreaders – can be incorporated, making precision surgery easier and safer.

Researchers at the Fraunhofer Institute for Manufacturing Engineering and Automation IPA in Stuttgart, Germany, developed the device in collaboration with Weber Instrumente, to the south of Stuttgart.

By integrating electronic components, the surgeon is given feedback during the procedure, advising him if he can insert the instrument even further. For example, if he tightens a screw, then the sensors measure the applied force.

This new kind of instrument handle incorporating an LED-based optical feedback system will soon be supporting physicians in the operating theater. As soon as a medical procedure’s optimal torsional moment is reached, an LED on the inside of the instrument handle lights up to alert the surgeon. The Fraunhofer researchers will present the first prototype at the 2013 Medtec trade show, also in Stuttgart running from February 26 to 28.

Once the optimal torsional moment is reached, LEDs report this through an optical signal. This signal can be seen through the transparent silicon sections of the handle. Christof Giers, a development scientist at Fraunhofer IPA, comments, “It is primarily the young, less experienced surgeons with little surgical practice who will benefit the most from this technology.” The necessary electrical power is supplied and stored via an inductive charging process or a coil system.

"One coil is located inside the hand grip; the other is in a little table. The surgeon merely has to put the handle on the table, and the battery is charged," adds Giers.   All of the electronics – including the sensors, assessment and LED – are installed in the handle. This means there is no split or seam maximizing the hygiene of the device.

Another special feature in this respect is that the instrument handle can be sterilized at 134˚C. Since the electronics are switched off in the sterilization process, it can withstand the high temperatures undamaged. “Previously, surgical instruments had no electronics inside because such heat would have rendered them inoperative,” explains Giers.

The researchers say they plan to enhance the approximately 9cm handle with a wireless interface, so that the sensor data can be transmitted to a PC, thus allowing the surgical process to be documented.