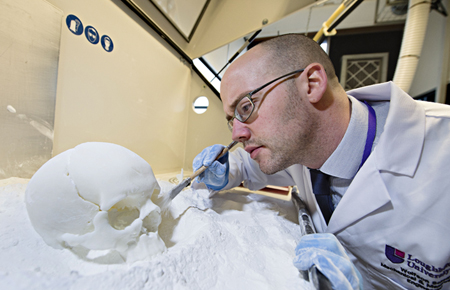 Loughborough University’s expertise in 3D printing has been used by the University of Leicester (both located in Leicestershire, UK) to breathe new life into the recently-discovered remains of King Richard III – creating a replica of his skeleton.

Richard III was King of England from 1483 until his death in 1485 in the Battle of Bosworth, which was fought just a few miles from where his skeleton was found under a Leicester car park in 2012.

Scientists from Loughborough’s School of Mechanical & Manufacturing Engineering were invited to make a replica of the king’s skeleton, using the 3D printing techniques.

Scans of the king’ remains taken by the Leicester Royal Infirmary were sent to Loughborough, 17km distant, where they were transformed into a 3D computer model. Laser sintering was then used to create a 3D plastic physical replica of the skeleton.

Professor Russell Harris – head of Loughborough’s Additive Manufacturing Research Group – who led Loughborough’s involvement in the project, said, “Generating the first 3D computer models was a very exciting moment. And later seeing the skull of Richard III emerge from the powder of the laser sintering machine in physical form was incredible. 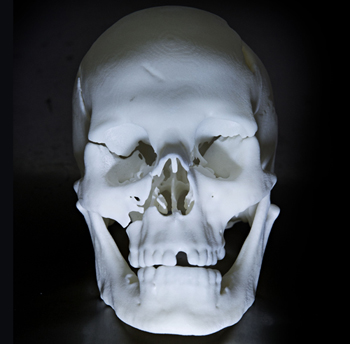 “It was quite clear to see a number of the significant injuries that he had sustained in battle, and at last the greater story of how the King met his death can be told.

"We believe that recording various aspects of the remains, in both electronic and physical form, will be invaluable for future studies.

“Loughborough’s 3D printing and additive manufacturing activities span a great number of disciplines but this was an exceptionally rewarding case to be involved in.

"Working with the University of Leicester on this incredible discovery has been a privilege, and it is great that two neighbouring universities have been able to share expertise to create a lasting legacy to Richard III.”