Analyst firm tips Thailand to join China, Japan, Australia, and India as the major markets in the region. 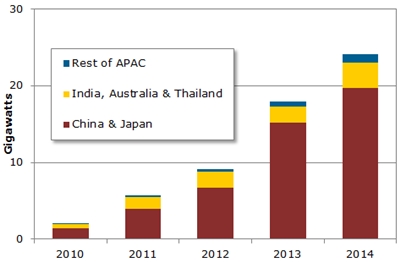 Market transition: the rise of the APAC region

Demand for photovoltaic modules and systems in 2014 will be dominated by the Asia-Pacific (APAC) region, which will account for around half of all new solar shipments as the industry continues its rapid transition away from Europe.

That is according to the latest report from the solar industry consultancy NPD Solarbuzz, which predicts that virtually all of that additional APAC capacity will be deployed in just five countries: China, Japan, India, Australia, and Thailand.

APAC countries are forecast to install more than 23 GW of PV generating capacity (at peak output) in 2014, more than the entire global PV industry installed during the year 2010. The figure would also eclipse the 19.2 GW that was installed in Europe in 2011, when demand from Germany and Italy was at a peak thanks to generous subsidy plans.

“APAC will dominate both manufacturing supply and end-market demand in 2014, with more than 80 per cent of module production also coming from the region,” said Solarbuzz analyst Steven Han.

He added: “This milestone marks the final chapter in the transition from historic European domination to a new PV industry, where supply and demand from APAC will determine the basis of the 50 GW global PV industry going into 2015.”

If the forecast is proved correct, demand from the APAC region during 2014 would represent a remarkable jump of 35 per cent on the 18 GW figure anticipated for this year. 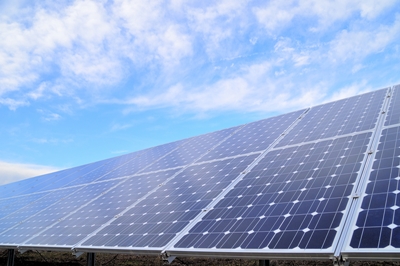 China raises targets
In 2013, demand has been dominated by China and Japan, who together accounted for more than 85 per cent of shipments as China’s government raised targets for PV installations and Japan sought to diversify its power generation away from nuclear.

Solarbuzz points out that the Chinese Bureau of Energy recently announced an aggressive target of 12 GW for 2014, of which 8 GW is expected to be installed on rooftops, with the remainder destined for ground-mount applications.

Generous Japanese government support has seen PV demand in the country more than triple this year, with a project pipeline of more above 20 GW now in place.

Solarbuzz reckons that Thailand will be the next APAC country to join the PV bandwagon, having set an increased target for renewable energy contributions of 25 per cent by 2021. The analyst says that Thailand’s National Energy Policy committee has proposed to install 800 MW of community-based solar-PV capacity, with an additional 200 MW to come from solar rooftops.

Overall, more than half of all PV capacity installed across the APAC region during 2014 is expected to come from ground-mounted projects, with less than a quarter derived from residential and small commercial rooftop segments – another significant change from the days when Europe dominated the scene.