No fewer than 106 e2v image sensors make up a huge detector aboard Gaia, now on a five-year mission to map the Milky Way. 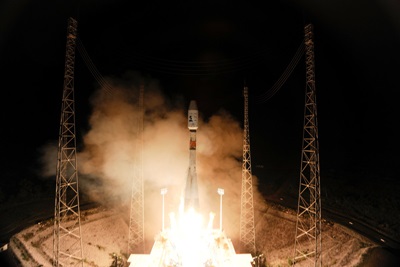 The European Space Agency (ESA) “Gaia” satellite, which blasted off from the ESA spaceport in French Guiana on December 19, is set to map the billion stars that make up Earth’s local galaxy with the largest digital camera ever to fly in space.

Gaia is carrying a 710 kg payload that features two telescopes, red and blue photometers to measure the make-up of the stars, and a radial velocity spectrometer that will determine their relative motion.

The instruments will carry out the most extensive survey yet undertaken of the Milky Way, measuring the position and velocity of stars and determining their brightness, temperature and composition.

Using that data, astronomers will then create a three-dimensional map of the galaxy with unprecedented detail, while physicists will be able to test Einstein’s General Theory of Relativity to its limits.

To generate all of that information, the light emission of each star will be measured optically using the largest focal plane array ever flown in space. It was designed and built by the European aerospace giant Astrium, and features a mosaic of 106 large-area, high-performance charged coupled device (CCD) image sensors.

According to ESA, the two identical telescopes on board Gaia will point in two directions, separated by a 106.5° basic angle and merged into a common path at the exit pupil. The optical path of both telescopes comprises six mirrors, with the last two shared by both telescopes.

Each has an aperture of 1.45m × 0.5m and a focal length of 35 m. The telescope elements are built around a hexagonal optical bench with a diameter of around 3m that provides structural support. 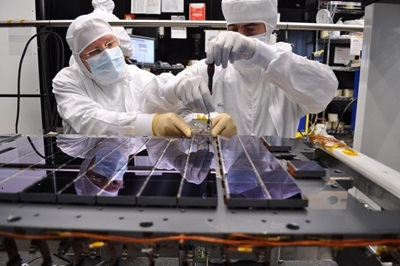 CCD mosaic
Custom designed, manufactured and tested by UK manufacturer e2v technologies, the CCDs at the heart of what is effectively the largest digital camera ever launched are expected to reveal tens of thousands of previously unseen objects, ranging from asteroids in the Solar System and planets around nearby stars to supernovae in other galaxies.

For the brightest objects, says e2v, radial velocities - movement towards and away from the satellite - will be measured by looking at the spectra produced by certain stars in a narrow range of the near-infrared region.

The UK firm said of its CCD91-72 sensors on board Gaia: “e2v’s specialist technology has been implemented into each of the image sensors, with functionalities like charge injection, anti-blooming and TDI gate structures to meet the specific needs of the mission.”

“There are three variants of the CCD91-72, each optimised for different wavelengths in the range 250 to 1,000nm. The CCD package is three-sided buttable, to minimize the dead space between CCDs when they are tiled together in the mosaic and all CCDs have been through e2v’s world leading back thinning process.”

Each of the CCDs provides a 4500 x 1966 pixel array, meaning that the entire assembly effectively represents a remarkable 937 megapixel digital camera, and is approximately the same size as a 37-inch LCD television.

Technology push
Hans Faulks, who heads of e2v’s space and astronomy unit said: “All the hard work, dedication and expertise that has been put into our sensors and into the mission will finally come to fruition. Our products will now play their part in history as we help increase our understanding of our universe.”

“Gaia will outdo its predecessor in terms of accuracy, limit magnitude and number of objects. It will pinpoint the position of stars with accuracy in the order of 10-300 microarcseconds (10 microarcseconds is the size of ten-cent coin on the Moon, when viewed from Earth). All this is thanks to companies like e2v, who are able to push technology to the extreme.”

The UK firm was just one of many industrial partners involved in the mission, which included three US companies as well as dozens from all across Europe. US-based Barr provided optical filters for the photometers and radial velocity spectrometer, while a combination of France’s Sagem, Belgium’s AMOS and Germany’s Zeiss provided the mirrors.