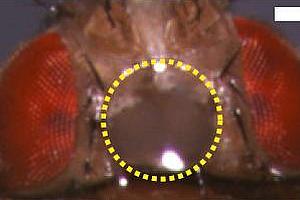 Techniques such as two-photon excitation microscopy can reveal important information about cellular activity in the brain, but successfully applying the technique to live subjects is far from trivial.

Such in vivo procedures typically involve a lengthy and complicated surgical preparation process, which places significant restrictions on what can, in practice, be accomplished.

One particular hurdle is the creation of a suitable optical window, through which to gain access to the brain's interior and perform the microscopy. In the kind of small model organisms currently of interest, the manufacture of this window often involves removing, or at least thinning, a protective and highly scattering exterior.

A team at Stanford University has developed a technique that might hold an answer. A short-pulse 193 nm excimer laser specially optimized for the task was used to create 12 to 350 micron observation windows in the exoskeletons of fruit flies, through which two-photon microscopy could then monitor specific neurological functions in the brain.

The procedure proved to be very effective, cutting optical windows with an edge precision of better than one micron, and doing so in a largely automated operation completed in less than one second. The work was published in PNAS.

According to Supriyo Sinha of Stanford, efforts to use longer wavelength UV lasers and ultra-fast infra-red systems to cut such optical windows have been made in the past, but this is the first time that the use of an excimer source has been investigated and its advantages exploited.

"The linear absorption of the excimer laser's 193 nm light in tissue is very high, which prevents unabsorbed light from leaking into the brain and damaging the brain's functionality or bleaching the fluorescent proteins," he commented. "This is a major advantage over longer wavelength UV lasers."

The nanosecond pulses from the excimer and its high-energy photons also allow the areas of tissue to be removed by percussive laser drilling, rather than scanning. Previous studies using other ultra-fast laser systems have typically involved focusing onto an area of several square microns and then scanning across the surface, increasing the total surgery time; but the new approach avoids that problem. A further consideration is that the excimer laser is much cheaper than alternative systems.

Holes of high aspect ratio
The excimer laser satisfied the team's wish for nanosecond pulse lengths and repetition rates below 200 Hz, in order to minimize the heat deposited into the subject. A further beneficial characteristic of the system was its low NA, enabling the system to create high-aspect-ratio holes of small diameter; a distinct advantage compared to manual dissection techniques.

"The advantage of the low-NA system provided by the excimer source is that we can achieve, for example, a 10:1 aspect ratio for holes with diameters as small as 25 microns," said Sinha. "This is not possible with high-NA systems, such as those used with ultra-fast regenerative amplifier systems."

The beam profile itself was less critical for this work, with the source's typical non-diffraction-limited performance proving sufficient to remove thin layers of tissue and create holes of the desired size and aspect ratio. Sinha noted that use of more expensive excimer systems that are nearly diffraction-limited could allow for the creation of holes with the 10:1 aspect ratio but even smaller diameters, perhaps down to two microns.

"We believe that excimers are the ideal lasers for this application," he said. "In particular, the 193 nm ArF excimer lasers have the best combination of wavelength, pulse length and pulse energy, although a laser with higher pulse energies would allow for a larger surface area to be removed, if desired. This is not an issue with fruit flies, but if, for example, we wanted to make a very large window in a mouse, of the order of 50 square millimeters, then this might be beneficial."

Successful two-photon microscopy on the fruit fly subjects satisfied the team that the impact of the laser-cut optical window on the health of the subject was substantially less than that caused by conventional manual dissection. Imaging durations of up to 18 hours were achieved, several times longer than prior in vivo microscopy studies. In practice this could enable the investigation of numerous questions in neuroscience regarding neuronal plasticity, learning and memory.

The PNAS paper depicted the use of the excimer-based surgical technique on flies mounted in groups of four on a single silicon wafer, and showed that all four surgeries and subsequent imaging operations could be completed in 22 seconds. The same technique was also applied to ants and to C. elegans nemotodes as proof of concept.

The next goal for the Stanford team could be a larger system capable of imaging the brains of dozens of behaving fruit flies simultaneously. "Demonstration of the four-fly mount and the rapid surgery on those flies is another step towards this system," commented Sinha.