European Commissioner Neelie Kroes hails deal as of ‘vital economic importance’, but budget is half that originally proposed. 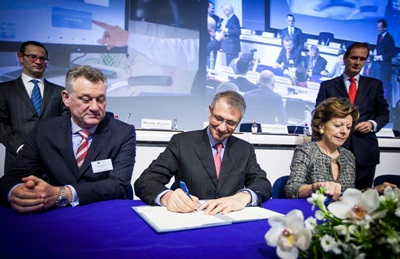 Signed and sealed: the photonics PPP

The European Commission (EC) and the Photonics 21 Association have signed a public-private partnership (PPP) that will see €3.5 billion funnelled into the near-market development of photonics technology as part of the Horizon 2020 innovation program.

The deal represents the culmination of nearly three years of negotiations between Europe’s photonics industry representatives and the Brussels bureaucracy. However, the end results sees only half of the hoped-for investment by the EC in the PPP budget.

Photonics21 stakeholders, who agreed in September 2011 to leverage any central funding for the PPP by a factor of four, had been aiming to negotiate a contribution of €1.4 billion from the EC.

That would have amounted to a €7 billion budget for the PPP overall, but with only €700 million now forthcoming from Brussels, the overall plan will be worth €3.5 billion.

The decision to halve the proposed PPP funding was taken in the midst of negotiations between the EC, the European Parliament and European Council that concluded last month with a new “multiannual financial framework” – or budget - agreement for the 2014-2020 period.

“Vital economic importance”
Ahead of the signing, in a video address recorded at last week’s meeting of the European Photonics Industry Consortium (EPIC), Kroes identified photonics as being of “vital economic importance” to Europe, and hailed the PPP agreement as a “crown jewel” within the wider Horizon 2020 innovation program.

She predicted that the PPP would lead to faster innovation processes and a faster time to market for photonics innovations developed in Europe. A wider range of funding instruments, including venture finance, would also be made possible, Kroes said, adding:

“It is a great opportunity that we can build on. We can create a vigorous European leadership that creates a better future for all.”

In a press statement, Photonics 21 executives Schulte and Anania welcomed the PPP as a “significant boost” for the sector and innovation in Europe overall. Anania acknowledged the wider funding squeeze, saying:

“Given the tighter fiscal belts in the EU’s overall budget, it is now all the more important that different EU funding streams are well-aligned, and that every euro is spent wisely.”

“Smart specialization and smart spending, coupled with massive simplification and greater flexibility, will therefore be at the heart of the photonics PPP’s efforts to ensure the greatest impact possible on economic growth and job creation.”

Schulte said: “As a key enabling technology, photonics plays a pivotal role in the re-industrialization of Europe, and expanding the industry share of the European economy beyond the current 16 per cent by 2020.”

Preparations for signing the PPP have recently seen the Photonics 21 Association emerge as its official private-sector partner. According to Photonics 21, it will become fully operational in 2014 and set out to ensure close co-operation between the EU, industry and academia.

Work programs
Exactly where the PPP funding will end up remains to be seen, but in the words of Kroes, the role of photonics is “very visible” in the first Horizon 2020 work programs that have just been published.

The first calls under the “industrial leadership” element of Horizon 2020 saw €47 million earmarked for photonics projects, including €28 million for biophotonic screening of diseases, and €8 million for open system architectures used in solid-state lighting.

The photonics PPP was not the only one being signed in Brussels on December 17. In fact, eight such agreements were formally agreed, on topics including green vehicles, robotics and high-performance computing.

Most of the other PPPs funded will rely to some degree on photonics – for example vision technologies for robots, high-speed optical connections in high-performance computing, and advanced laser-based production techniques to create the lightweight materials that are critical for green vehicles.

Another of the funded PPPs, dubbed “factories of the future” and with a budget of €1.15 billion, specifically mentions photonics and 3D printing among its research and development objectives.