Advanced Fibreoptic Engineering emerged in the wake of the telecoms bubble. 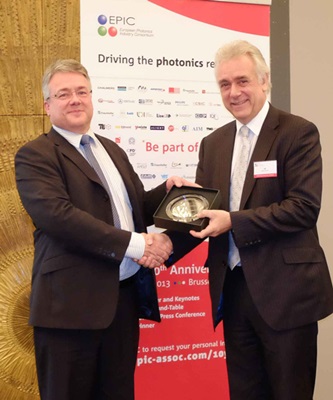 Phoenix from the flames: AFE

Nick Martin, the company’s CEO, was presented with the award by EPIC president Drew Nelson at the organization’s tenth anniversary celebrations, held on December 13 in Brussels.

AFE emerged in the wake of the burst telecoms bubble of the early 2000s, surviving a hugely challenging period for the part of the photonics sector exposed to optical communications. According to EPIC’s director general Carlos Lee, the award recognises the company’s spirit and persistence in turbulent times.

The company has its roots in the electronics distribution firm GCA Electronics, which operated out of Witney, Oxfordshire from 1994. The original business sold infrared LEDs, while customer feedback suggested a growing demand for fiber-optic packaging of these components.

Manufacturing soon dominated its operations and the company became GCA Fibreoptics, enjoying success during the 1990s as the telecoms bubble began to inflate. Before long, it had attracted the attention of Uniphase Corporation, which acquired the GCA business in 1995.

When Uniphase merged with JDS Fitel in 1998, a key deal in the optical components business that resulted in the creation of JDS Uniphase (JDSU), GCA became part of a company that was synonymous with the optical communications rollercoaster of the time.

Bubbling up
In 2000, JDSU decided to close the Witney site and transfer production to a new $18 million facility in nearby Yarnton that opened in January 2001. But just three months later, as the largesse of the telecoms bubble became apparent, that new facility was closed.

Later that year, a management buy-out created a new company called Afonics, which relocated from Yarnton back to the smaller Witney facility. Despite growing for the next four years, Afonics could not become profitable in the wake of the burst telecoms bubble and in May 2005 the company went into administration.

A month later, AFE was formed with just seven key staff, working closely with a handful of large customers, keeping costs under control and ensuring that products such as fiber-optic depolarizers were built and supplied to customers on time and at high yields.

Since then, AFE has enjoyed nine successive years of profitable trading, with sales said to have doubled since 2005. The firm now employs 32 staff and four contractors, with an annual turnover approaching $8 million.

The company says that it is continually seeking new market opportunities while ensuring that it supports all of its existing customers.