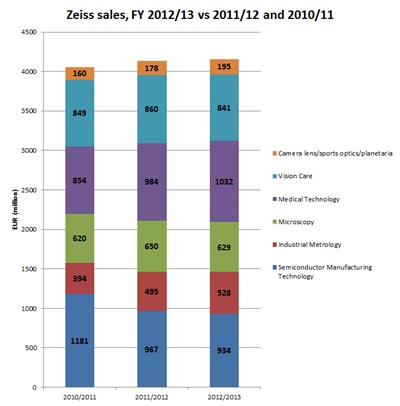 Medical technology up; semiconductor down

The Carl Zeiss Group has posted an all-time revenue record for the year ending September 30, after sales inched up by 1 per cent on the prior year, to €4.19 billion.

However, in a market described by the giant German optics firm as 'tense', its profits took a hit as earnings before interest and taxes fell by nearly a quarter to €335 million.

Zeiss operates across several market sectors, and so the overall picture represents a complex blend of trends. In medical technology, now the company’s largest single business unit by sales, demand was up, while the microscopy, industrial metrology and eyeglass optics markets were described as 'stable'.

Demand for lithography systems was down in the first half of the fiscal year, following the general dip in semiconductor equipment investment, but picked up again in the second half. "In fiscal year 2012/13 we reached and partly exceeded our targets," said Zeiss CEO Michael Kaschke.

He added that despite its lower profits, the company is continuing with its planned investment in facility upgrades and research and development. "We made no compromises in our multi-year investment program – the biggest ever in the company's history – but continued to implement it consistently and systematically,” he said.

Modernization continues
During the fiscal year, Zeiss spent €245 million as it continued the modernization of its sites in Germany. At its Oberkochen headquarters, that included new buildings for the company’s medical technology business group, as well as new production facilities for its semiconductor manufacturing technology business unit.

With a site logistics center also now completed, nearly 100,000 square meters of additional production and office space has now been created in Oberkochen over the past three years.

Among the equity investments made by Zeiss this year was a 60 percent stake in KLEO Halbleitertechnik. The Tettnang, Germany, company specializes in optoelectronics, parallelized data processing and ultra-precision engineering, and Zeiss says that the move gives it exposure to a future laser direct writing technology for electronics production.

Highlighted in Kaschke’s press conference presentation was a €411 million spend on research and development activities in the latest fiscal year, equivalent to around 10 per cent of revenue and up 5 per cent on the previous year.

The various Zeiss research and development efforts now comprises 2,685 employees, or 11 per cent of the workforce, in what is seen as critical work to ensure the company’s future prosperity. In the year ended September 30 alone, Zeiss applied for no fewer than 421 new patents. 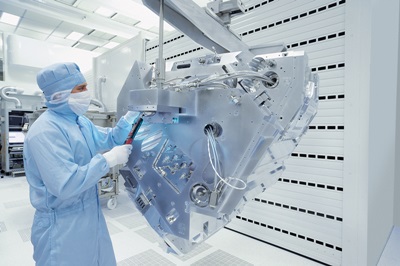 EUV challenge
A major part of the reason for that growing research budget relates to developments for semiconductor manufacturing technology, much of which revolves around extreme ultraviolet (EUV) lithography.

Zeiss describes EUV as the biggest challenge confronting its semiconductor business, and it is expected that key decisions by major chip manufacturers like Samsung and the Taiwan Semiconductor Manufacturing Company (TSMC) foundry in spring 2014 will determine the precise insertion point of the technology.

If they decide to ramp up with EUV production for the so-called 10 nm node, that will likely provide a major boost for key equipment provider ASML and major suppliers like Zeiss. However, with questions over the technology’s readiness for volume production still lingering, chip makers may yet decide to postpone EUV introduction until the 7 nm node – which would effectively mean a two-year delay.

Industrial microscopy targeted
Zeiss’s semiconductor unit generated sales of €934 million during the year, down 3 per cent on the prior year. Medical technology remained the group’s most lucrative sector, with sales just beating the €1 billion mark and up 5 per cent year-on-year.

Meanwhile its industrial metrology unit reported a solid 7 per cent increase in revenue to €528 million thanks to strong business in China and North America. Microscopy sales of €629 million were down 3 per cent on last year, with Zeiss blaming cuts in public-sector funding investment across the developed world.

Zeiss has decided to reduce the dependence of this business unit on government budgets, by expanding its efforts in microscope systems for industrial applications.

"In the past few years we have shown that we can also grow in the company overall despite a declining market for our semiconductor manufacturing technology sector," Kaschke said, before predicting:

“For fiscal year 2013/14, we predict a slight improvement in our revenue and earnings with a largely unchanged economic environment. We are confident that our strong, future-oriented portfolio and our investment efforts of recent years will pay off.”