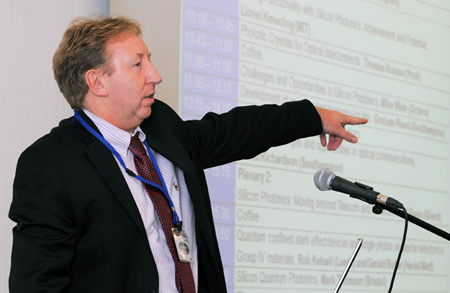 The project, which was led by Prof Graham Reed, Head of the Zepler institute‘s Photonics, Systems, Circuits and Sensors Group, brought together the expertise of the universities of Southampton, St. Andrews, Surrey, Leeds, and Warwick as well as McMaster (Hamilton, Canada) and commercial partners, Qinetiq, initially, which was later replaced by PLX Technology, the industry project partner.

The day-long conference – which drew more than 120 attendees, more than double that which was expected, reflecting the popularity of this subject – showcased research undertaken during the UKSP program and gave an opportunity for the exchange of the latest ideas in silicon photonics. The event also included tours of Southampton’s new suite of nanofabrication facilities and key application labs, as well as a poster exhibition on recent research highlights.

Reed told the packed conference, “Silicon photonics offers an opportunity to revolutionize a range of application areas by providing excellent performance at moderate cost due primarily to the fact that silicon is a thoroughly studied material, and is unsurpassed in quality of fabrication with very high yield due to decades of investment from the microelectronics industry.”

The UKSP projects focused on some of the more promising emergent silicon photonics developments and applications, such as optical interconnects and fiber to the home and other high bandwidth applications that will require highly cost effective and mass-produceable solutions. Silicon photonics is a seen as a leading candidate technology in these application areas as long as suitable cost-performance criteria can be achieved. 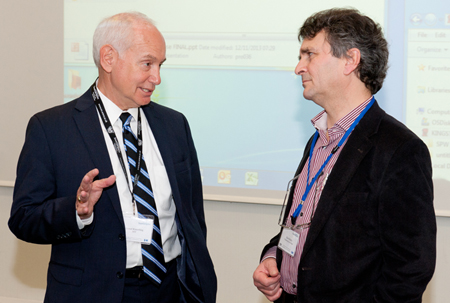 There were also presentations by other experts from the wider silicon photonics community. Plenary speakers were Professor Lionel Kimerling (MIT) and Professor Roel Baets (Ghent and IMEC).

Kimerling’s keynote presentation, “Scaling Functionality with Silicon Photonics: Achievement and Potential” considered the need for and methodology of achieving the necessary convergence between electronic and photonics technologies as well as between hardware and software architectures.

Kimerling cited Cisco’s forecast of the arrival of zettabyte traffic (1021 bytes/s) bandwidth demand by as early 2015 as a likely justification for the communications sector needing silicon photonics-based data handling chips.

He commented, “So datacoms is a big driver for silicon photonics but what are the other drivers? Every system is soon going to be self-aware and controlled – from the automobile to the cell-phone networks so there will need to be intelligence everywhere and sensors everywhere. So silicon photonics-based sensors will also be a big driver for this technology besides datacoms.”

”The two key issues confronting silicon photonics at the moment are cost and reliability. If we can get past those two then we will be fine. However, much further developmental work is necessary because the cost factor at the moment is currently too high to get silicon photonics much past the cables and into the chipsets themselves.”

Roel Baets of the Photonics Research Group at Ghent University and IMEC’s Center for Nano- and Biophotonics, gave a presentation entitled Silicon Photonics: Moving Beyond Telecom and Datacom, which considered the increasing range of non-telecoms applications offered by silicon photonics. These include a variety of biosensing and gas sensing applications as well as Laser Doppler vibrometry and optical coherence tomography for biological and structural analysis, including so-called “spectroscopy-on-a-chip” developments.

Baets commented, “Besides communications applications, silicon photonics makes a lot of sense in at least three other situations: High volume markets with extreme performance/cost ratios, such as active optical cable, data centers, and single use biosensor chips. It also has great potential in extreme performance situations, based on its application to nano-accuracy coherent receivers, high performance spectrometers and filters, and in photonic crystal devices.”

Silicon photonics is a field that has seen rapid growth and dramatic changes in the past five years. According to the MIT Communications Technology Roadmap, which aims to establish a common silicon photonics architecture platform across diverse market sectors “with a potential $20 billion in annual revenue”, this technology is now rapidly transferring from the lab to the marketplace.

US based semiconductor giants such as Intel and IBM have shown their commitment to the enormous potential of this technology with substantial investments. The sector has also seen large investment in the field by DARPA in the USA under its Electronic and Photonic Integrated Circuit (EPIC) initiative. Significant investment in the technology has also followed in Japan, Korea, and to a lesser extent in the European Union (especially at IMEC and LETI). The technology offers an opportunity to revolutionize a range of application areas by providing excellent performance at moderate cost.