Three-satellite mission to monitor Earth’s magnetic field over the next four years. 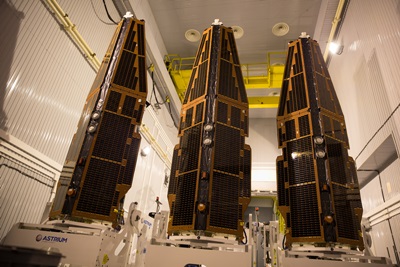 The European Space Agency’s “Swarm” mission, launched from Russia on November 22, is set to probe the mysteries of Earth’s magnetic field with the aid of fiber lasers from Denmark’s NKT Photonics and imaging sensors provided by UK-based e2v.

It is hoped that the three-satellite constellation – ESA’s first such launch for Earth observation - will fill some major gaps in human knowledge about the origin of the magnetic field, and why it appears to have weakened significantly over the past two centuries. Those are pressing questions, given that the field protects the planet from potentially damaging solar winds.

ESA says that the combination of data collected by Swarm should yield information about how the field relates to the motion of molten iron in Earth’s outer core, as well as how the conductivity of the mantle is related to its composition and how exactly the Earth’s crust becomes magnetized.

The three identical satellites are carrying a suite of sensors developed by European and Canadian scientists. Most of the on-board instrumentation is dedicated to the new types of magnetometers that will be used to measure the magnetic field, but each satellite also features a laser retroreflector to provide precise orbit information, and an “optical bench” on its deployable boom.

NKT Photonics told optics.org that several of its Koheras-branded BasiK single-frequency fiber lasers were flying on board the Swarm mission, while it represents just the latest in a series of payloads to feature e2v imaging sensors.

So far, so good
On November 26, ESA confirmed that the launch and transition to orbit had gone exactly as planned. “We’ve had a trouble-free LEOP (launch and early-orbit phase) and the satellites are performing beyond expectation,” said flight operations director Pier Paolo Emanuelli. “We’re looking forward to an excellent mission.”

One satellite will fly at a higher altitude than the other two. Once fully deployed into “drifting” orbits to take measurements at different altitudes, each probe will provide information such as ion speed, direction and temperature.

Density and winds around each satellite can be derived by combining data from the different instruments, says ESA. Combining observations from the lower pair of satellites will lead to a new way of quantifying the currents that flow along geomagnetic field lines connecting the magnetosphere to the high-latitude ionosphere.

It is hoped that the geomagnetic field models resulting from Swarm will provide new insights into Earth’s interior. These data, along with measurements of atmospheric conditions around the orbiting satellites, will aid studies into Earth’s weakening magnetic shield, space weather and radiation hazards.

Aside from that scientific side of the mission, the data collected by the three probes will also be put to practical use to help improve the accuracy of navigation systems carried by satellites, as well as to advance earthquake prediction and to improve the efficiency of drilling for natural resources.