US Department of Energy and Global Laser Enrichment begin negotiating over Kentucky stockpile. 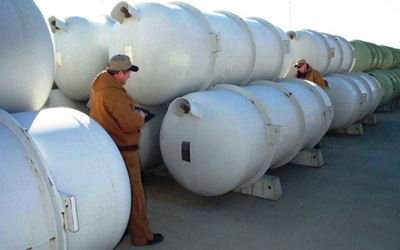 A stockpile of depleted uranium in Paducah, Kentucky, could be turned into what would effectively become one of the world’s largest mines of the nuclear material, thanks to a new agreement over laser enrichment technology.

On November 27, the US Department of Energy (DOE) announced that it would start negotiations with the GE-Hitachi joint venture company Global Laser Enrichment (GLE) for the sale of the depleted uranium hexafluoride inventory in Paducah.

GLE had previously proposed using a laser isotope separation technology licensed from Silex Systems, the Australian company that has been developing it. The resulting enriched uranium could then be sold on to nuclear energy providers, thereby helping to clear up the Paducah site.

“[GLE’s] commercial operation also has the potential to produce substantial economic benefit to the Paducah region through the addition of highly skilled technical jobs and increasing the local tax base,” said the DOE in a statement, adding that it should also reduce the overall cost of cleaning up the site.

“Key turning point”
Michael Goldsworthy, the CEO of Silex Systems, hailed the DOE’s decision as a highly significant one for laser enrichment, a technology that has been under development for decades but which has also come under scrutiny by those worried about its potential impact on the proliferation of nuclear materials.

In a Silex Systems press release Chris Monetta, the CEO of GLE, added: “We are excited about entering exclusive negotiations with the DOE for the Paducah facility and the prospect of tapping into the highly-skilled nuclear workforce in the area. We are equally as excited about potentially playing an important role in securing our nation’s energy future with a reliable, US-based supply of natural uranium for years to come.”

The DOE and GLE are now set to enter a period of commercial contract negotiations that is expected by Silex to be completed in early 2014 - although the advancement of the project remains contingent on a number of factors.

The laser enrichment technology proposed for Paducah is based on a process developed by Silex and licensed exclusively to General Electric in 2006, before the creation of GLE with partners Hitachi and Cameco in 2007.

It is currently being scaled up to support potential commercial deployment at another facility in Wilmington, North Carolina, for which the US Nuclear Regulatory Council (NRC) issued a license for laser enrichment in September 2012.

Perpetual royalty
Silex’s business model would entitle the company to a perpetual royalty of between 7 and 12 per cent on revenues generated by GLE from any future commercial laser enrichment operations in Paducah, with the precise amount dependent on plant capital costs.

The proposal for Paducah involves upgrading so-called depleted uranium “tails” that have been left over from previous enrichment activities at the site that used a much older gaseous diffusion method to separate the fissile 235U isotope from the far more nturally abundant 238U.

The resulting laser-enriched uranium would be “natural grade” material suitable for potential sale in the US and elsewhere. Silex says that, depending on the production rate, the tails processing plant could be equivalent to one of the world’s largest uranium mines operating for up to 40 years.

Assuming that GLE reaches a commercial agreement with the DOE, it would then have to submit another application to the NRC to construct and operate the Paducah facility. That application could be submitted in 2014, after which the NRC would undertake an evaluation similar to that completed before it awarded the Wilmington plant's license.