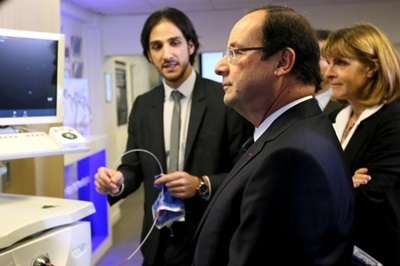 François Hollande, the president of France, witnessed the potential of optical biopsies for early cancer detection at first hand last week, with a visit to Mauna Kea Technologies.

Sacha Loiseau, the Paris company’s CEO and founder, demonstrated the “Cellvizio” confocal laser endomicroscope to Hollande. He is said to have urged the president to streamline and accelerate the reimbursement processes for new medical procedures by the French healthcare authorities, thus enabling patients to benefit from technological innovations like Cellvizio more quickly.

Loiseau also called for greater access to public procurement contracts for small and medium-sized high-tech businesses, something that is seen as critical for them to grow and become exporters.

Described by Mauna Kea as the world’s smallest microscope, Cellvizio first gained regulatory clearance from US and European authorities back in 2005. The technology has since been evaluated in a variety of clinical studies, principally to aid the detection of cancerous or abnormal pre-cancerous cells in real time.

Global installed base
In July, Mauna Kea said that the global installed base of Cellvizio probes had now exceeded 200 units, while recent efforts have focused on developing the technology for applications in the gastrointestinal (GI) tract.

Having also developed probes that are now small enough to be used in combination with biopsy needles, the company is targeting diagnoses of pancreatic cysts that are often benign, but which sometimes represent pre-cancerous growth.

“Since pancreatic cancer is a horrible disease, it's important to characterize these cysts and manage them appropriately,” the company told optics.org earlier this year.

“We envision that this probe could be used in other solid organs and masses in the future," said its director of clinical affairs, Anne Osdoit. "One can imagine many applications in which physical biopsies are difficult or impossible, and where having access to an optical biopsy in real-time would be a big change."

Founded in 2000, Mauna Kea Technologies was floated on the NYSE Euronext Paris stock exchange in 2011. It now employs 110 people, including 75 in Paris.

President Hollande was accompanied by Anne Lauvergeon, president of the "Innovation 2030" commission in France, on his visit to the company.

Meanwhile Loiseau has been appointed as co-leader of the “medical devices and new healthcare equipment” plan in France, one of no fewer than 34 development plans designed to revive industrial output in the country that were launched recently.