Systems from Amada, Trumpf and others promise further growth for laser-based materials processing. 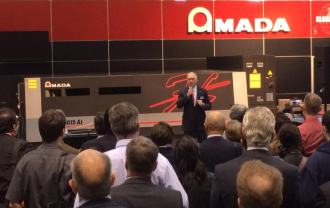 Amada and JDSU in collaboration

Mark Douglass of Longbow Research, Ohio, reported from the show that "the metal fabrication market in the US is still healthy and businesses are willing to invest, in spite of meager US GDP growth and uncertainty."

CEOs participating in a Fabtech round-table session agreed, with speakers arguing that skills shortages and a persisting negative view of manufacturing industry among educators posed challenges to any sustained recovery, but that these were eminently solvable.

On the show floor, fiber- and CO2-laser systems continued to compete for attention, while manufacturing companies demonstrated the ability to cut larger metal sheets; several of the new machining platforms on show were designed to handle sheets of raw material 3 meters x 1.5 meters in size.

"Fiber lasers continue to proliferate and it appeared that there were even more machines outfitted with fiber lasers than last year," noted Douglass in Longbow's show report. "IPG continues to dominate the fiber laser landscape and fiber lasers are expected to continue share gains in 2D cutting. One reason for the increase is machine OEMs are improving cutting capability with thick metals, most notably Trumpf and Amada."

Amada and JDSU
Amada announced a new sheet metal cutting system developed in collaboration with California-based JDSU, continuing the partnership between the two companies. The ENSIS-3015AJ system is built around a new high-power fiber laser, said to be capable of providing 4 kW of output power. A variety of metals up to 25 mm in thickness can be processed, according to the company.

The system is intended to provide a new level of flexibility, thanks to the platform's ability to cut both thick and thin metals through changes to the beam configuration. Previous cutting systems have adjusted beam parameters to suit different metals through manual adjustment of a condenser lens, but the Amada system is said to do away with this approach.

Speaking at the show, Amada indicated that the new laser allowed metals that previously required 4 kW of power to now be cut using only 2 kW of power, with no loss in cutting performance. The system also occupies up to 50 percent less space and requires less power.

"For more than six years, JDSU and Amada have collaborated to design the industry’s most innovative fiber laser solutions," commented JDSU CEO Tom Waechter. "Our combined efforts on this second-generation fiber laser provides a highly differentiated solution and we look forward to continue transforming the fiber laser market with Amada for years to come." 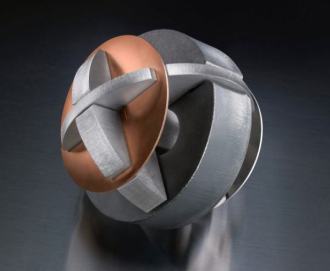 It makes use of the company's "BrightLine fiber" technology, intended to enhance the processing of thicker metal sheets.

According to Trumpf, BrightLine fiber tackles a potential problem encountered with fiber-delivered laser sources, whereby the small beam size makes expulsion of molten material from the cut more difficult and affects the quality of the end result, especially with thicker materials.

The company has previously employed the BrightLine label to indicate the use of new nozzle technology which accelerates the cutting gas. Douglass surmised that the BrightLine fiber system made adjustments to the laser output in tandem with its beam delivery system and process gas nozzle, and described it as a significant introduction for the company.

Trumpf also demonstrated the TruLaser Cell 3000, a 5-axis laser machine for fine cutting and precision welding built around a 8 kW laser source, that is new to the North American market.

Elsewhere at Fabtech
• Bystronic demonstrated the ByAutonom 3015 laser cutting machine, built around the company's 4.4 or 6 kW laser sources. As the name suggests, ByAutonom is said by the company to reduce operator intervention as much as possible, through the automation of most common processing functions.

• Mitsubishi focused on the advantages of automation in its Fabtech exhibits, but also unveiled a new version of its eX system, said by the company to represent the fifth generation of its 2D laser-cutting platforms. It demonstrated the 3015 eX-S Edition featuring a 2.7 kW resonator; a reduction in output power compared to the existing models in the eX range which have featured 3.5 to 6 kW resonators.