A novel camera from a Fraunhofer development team makes hidden tumors visible during an operation.

Surgery to remove cancerous tumors poses a great challenge to surgeons. Tumorous material tends to blend into surrounding healthy tissue and these are difficult to differentiate. Furthermore, distributed areas of cancer and so-called pre-malignancies are difficult to recognize. A newly-developed camera system can help visualize during operation - even the smallest, easy-to-overlook malignant pieces of tumor - and thereby supports surgeons during complicated interventions.

The camera can display fluorescent dye molecules that “paint” the cancer tissue. These are injected into a patient's blood circulation prior to the operation and selectively attach onto the tumor. When the relevant area is illuminated with a specific wavelength, fluorescence is emitted and the malignant tissue glows green, blue, red, or any other color, depending on the dye, while the healthy tissue appears is unaffected. By this means, surgeons can see clusters of tumorous cells that could not be recognized by the naked eye. 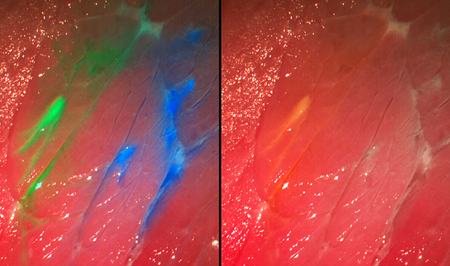 The camera displays colored structures by means of fluorescent dyes.

Several dyes revealed at once

Researchers at the Fraunhofer Project Group for Automation in Medicine and Biotechnology (PAMB), part of the Fraunhofer Institute for Manufacturing Engineering and Automation (IPA), have developed this new surgical aid, which is a multispectral fluorescence camera system. The camera will be integrated into various medical imaging systems such as, surgical microscopes and endoscopes.

The scientists, based in Mannheim, Germany, will debut a prototype of the system at next week's Medica Trade Fair (2013) in Düsseldorf, germany, on the joint Fraunhofer booth, between 20-23 November (Hall 10, Booth F05). The feature that the development team is most keen to highlight is that the camera can display several fluorescent dyes and the reflectance image simultaneously in real time. Previously available systems have not been able to achieve this

Nikolas Dimitriadis, a scientist at PAMB, commented, “An advantage of this approach is that arteries and delicate nerve tissues, which must not be injured during an operation, can likewise be colored with dye and so be detected by the new camera and avoided. The visibility of the dye to the camera depends in large part on the selection of the correct set of fluorescence filters. The filter separates the incident excitation wavelengths from the fluorescing wavelengths so that the diseased tissue is also separated from its surroundings.”

The researchers and their colleague require only one camera and one set of filters for their photographs, which can present up to four dyes at the same time. Software developed in-house analyses and processes the images in seconds and presents it continuously on a monitor during surgery. The information from the fluorescent image is superposed on the normal color image.

Dr. Nikolaos Deliolanis, head of the Biomedical Optics Group at PAMB, added, “The operator receives significantly more accurate information. Millimeter-sized tumor remnants or metastases that a surgeon would otherwise possibly overlook are recognizable in detail on the monitor. Patients operated under fluorescent light have improved chances of survival."

In order to be able to employ the multispectral fluorescence camera system as flexibly as possible, it can be converted to operate with different combinations of dyes. For example, one preparation already available to make tumors visible is 5-amino levulinic acid (5-ALA).

"Surgeons employ this especially for glioblastomas – one of the most frequent malignant brain tumors in adults,” adds Dimitriadis. 5-ALA leads to an accumulation of a red dye in the tumor and can likewise be detected with the camera. The multispectral fluorescence imaging system should have passed testing for use with humans as soon as next year. The first clinical tests with patients suffering from glioblastomas are planned for 2014."