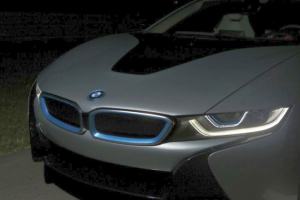 Automotive headlamps based on LED sources have made considerable inroads into the market, displacing xenon high-brightness lamps in certain models thanks to their compact size and efficiency.

Most are based on phosphor-converted white LEDs (pc-LEDs), in which LEDs of one color are coated with phosphors of different colors to form white light. Multiple LED chips per package can be used to produce a relatively high-intensity hot-spot in the far-field.

But there is still room for improvement, especially in the luminance and flux provided by these lighting systems.

BMW believes that lasers might hold the answer. It has developed a laser-based light source intended to provide a highly collimated beam of light, able to act as a "high-beam booster" to the main LED-generated headlamp illumination.

"Our design aim was to enable two things: better light function and improved design flexibility," commented project manager Stefan Weber. "Illuminance and beam width are important factors in the improvement of night-time visibility, and we believe that this systems allows both."

The laser system is based around a high-luminance solid-state point-source, used to excite a remote yellow phosphor. BMW employs a high-power multi-mode blue laser diode, with an emitting surface said to be 10,000 times smaller than that of the blue chip in a high-power white pc-LED.

"From an optical engineering standpoint, a laser is the ideal high-luminance source," said BMW's Abdelmalek Hanafi, co-inventor of the system. "The energy surface is small, around 10 microns by 5 microns, and the light can be focused into very small areas. The result can reach up to 3000 candela per square millimeter; at least ten times better than LEDs."

As applied by BMW, the new point-source is used to complement the performance of the existing high-power white pc-LED-based illumination modules. The LEDs generate the "background" in the intensity distribution pattern, while the high-luminance point source adds a hot-spot of collimated light at a greater distance, considerably increasing the driver's visibility range.

Since a vehicle is a very specific platform within which to integrate a semiconductor laser diode, the designers faced some challenges, including optimizing the phosphor to meet the requirements of the application and controlling the temperature. Here the remote phosphor principle played a part, since it has the advantage of cooling the laser diode and the phosphor separately.

According to Hanafi, the laser diode in the BMW system typically remains at a 25 degree operating temp, while the phosphor operates at 105 degrees.

Far-field distribution
The principle of lasers acting on phosphors to produce bright but non-coherent illumination is already exploited in laser projection systems, but in this case the application is somewhat different.

"This is not projection system; it's a far-field distribution, and this is very regulated," noted Hanafi. "Each point has a certain candela value that has to be fulfilled. Automotive light distribution is quite inhomogeneous, with a lot of intensity gradients in the far field. We see the advantages of using a laser whenever such a spot is needed, complementing the LED technology." 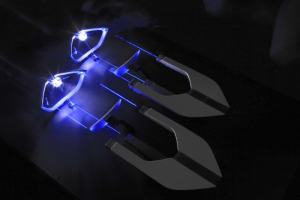 The important parameters during development were color temperature, design flexibility, brightness and safety; all topics where stringent automotive regulations had to be met.

"The unit is small and compact, with a lit aperture of less than 27 millimeters and a collection efficiency of 55 to 70 percent," said Weber. "The benefit and selling point for customers is a high-beam range which has never been seen before, close to the limit allowed by ECE regulations, but it does not require a large headlamp. Instead it comes out of a small reflector, assisting with aerodynamics and reducing weight."

A high efficacy and favorable ratio of electrical power input to generated luminous flux should also help to reduce the power consumption.

Safety concerns were naturally to the fore, in order to protect other road users, pedestrians, and wildlife. The high-beam laser-light booster is intended for use only above a certain speed, and after the activation of the main LED-generated high-beam.

Since the point-source involves Class 4 laser diodes, its package was constructed to meet all relevant regulations and prevent leakage of the coherent blue pumping light. Any evidence of the onset of failure, whether in normal use or due to a traffic accident, results in automatic shut-down.

"The light emitted by the phosphor is not coherent any more, but as with any source the high luminance is what could cause eye damage," said Hanafi. "We take steps to protect users and pedestrians from this."

BMW's laser system has for some time been targeted at the BMW i8 hybrid mid-engined sports car, and was demonstrated in that model at the Frankfurt Motor Show in September 2013. Weber indicated that the system could start appearing in production towards the end of 2014.

"This program has answered our requirements for compactness, efficiency and design," he said. "We see only advantages so far."

• Other automotive manufacturers are considering different uses of lasers, some in more hypothetical scenarios. At the CES show in early 2013, Audi showed off a laser system incorporated in a car tail light, able to directly illuminate the road behind with a laser line as a safety measure for pedestrians and following cars.

The demonstration was intended as proof-of-concept only; such use of car-mounted laser diodes is currently strictly forbidden by safety regulations worldwide.