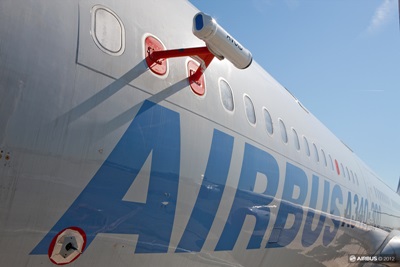 The European budget airline Easyjet says that by the end of next year it is planning to fit part of its fleet of aircraft with infrared cameras to detect volcanic ash.

That follows recent tests between the airline, plane manufacturer Airbus and Nicarnica Aviation, the Norwegian company that has been developing the camera for use in commercial aviation.

Nicarnica’s “AVOID” system, which is based on scientific work first published by its technical director Fred Prata more than two decades ago, was flown on one of Easyjet’s Airbus A340 aircraft in late October.

It was flying behind a military plane that dumped a tonne of Icelandic ash in a spiral pattern over the Bay of Biscay off the French Atlantic coast. According to the companies involved, the AVOID sensor demonstrated its ability to detect and image the cloud of particulate material down to “extremely low” concentrations, after it had dispersed in the atmosphere and was no longer visible to the human eye.

Able to pick out the ash from a distance of 60 kilometers, results suggest that the system would give pilots of commercial aircraft around ten minutes to navigate away from a plume. It detected ash densities down to 100 micrograms per cubic meter in the experiment.

Charles Champion, the head of engineering at Airbus, said of the test: “Today with AVOID we wanted to prove in the project that the ash-detection concept can work and this has been demonstrated in the test. Now we need to analyze all data gathered.” That analysis will include correlating the AVOID data with that collected by laser-based sensors mounted on a much smaller aircraft that flew into the ash cloud to take measurements directly.

Champion added: “We are at the beginning of an invention which could become a useful solution for commercial aviation to prevent large-scale disruption from volcanic ash.”

$2.6 billion lost
Such a system has been called for even since the 2010 eruption of Iceland’s Eyjafjallajökull volcano – combined with a stable high-pressure weather system that blew the ash cloud steadily towards Europe – closed much of the continent’s airspace for nearly a week and cost the aviation industry an estimated $2.6 billion.

And although there has been no repeat of those circumstances since, the kind of explosive eruption that shut down airspace in 2010 typically occurs every five years on average in Iceland. Magnús Tumi Gudmundsson from the country's Institute of Earth Sciences warns that a similar event is inevitable:

“Considering the relatively long time since the last eruptions in two of Iceland‘s most active volcanoes, Hekla and Katla, both should be regarded as ready to erupt,” he said. “It is not possible to predict when or where the next eruption will take place. What is certain is that it will happen.”

Pending the final analysis of the latest test flights, Easyjet is aiming to start fitting out part of its 200-strong fleet of aircraft with the AVOID system within months. Ian Davies, the airline’s engineering director, said:

"This is a key step in the final journey of testing the technology and moving towards commercial certification. Easyjet will now work towards a non-integrated stand-alone system which we aim to fit onto a number of our current fleet of aircraft by the end of 2014."

Prata, whose system takes near-simultaneous images at two different infrared wavelengths and uses bandpass filters to confirm the presence of silicates, has a maximum sensitivity for particles with a radius of around 6 µm - potentially the most damaging kind of size for a jet engine.

In 2011, he told optics.org that if AVOID was approved, Easyjet could look to buy up to 20 systems for its fleet. However, the approach could eventually find more widespread adoption in south-east Asia, where aviation is growing quickly and many of the world’s most active and dangerous volcanoes are also to be found.