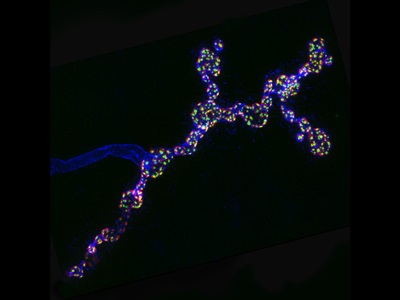 Optics giant Zeiss has introduced a new microscope that can be used to probe biomolecular structures beyond the optical diffraction limit, allowing biologists to see details of cellular structures with a remarkable resolution.

According to the company, its new “ELYRA” module for three-dimensional, super-resolution microscopy – including PALM - produces images with a lateral resolution of 20-30 nm and an axial resolution of 50-80 nm.

Although it is not the first technique to beat the optical diffraction limit as defined classically by Ernst Abbe, PALM relies on a relatively gentle photo-excitation of specimens, meaning that cell damage is less of an issue and that samples can be observed over a longer period of time.

“With ELYRA, researchers can investigate the structural arrangement of one or multiple proteins, reveal the ultrastructure of cell organelles in 2D and 3D, as well as map and count molecules within a structure,” says Klaus Weisshart, product manager for ELYRA. “Sophisticated algorithms relate photon statistics to precision information in all directions, so researchers can display their structures fully rendered in 3D.”

Photo-switching cycle
Pioneers such as Stefan Hell, who heads up the “optical nanoscopy” division at the German Cancer Research Center, have been at the forefront of super-resolution microscopy. Hell was the first to develop stimulated emission depletion (STED) microscopy, which is based on sequential excitation and quenching of fluorescent molecules, and variants such as PALM have extended the utility of the basic approach.

In PALM, photo-switchable fluorescent molecules are photo-activated and photo-bleached sequentially, so that only a small proportion of them are in an excited state at any one time. Repeating the process rapidly while identifying the position of target molecules during each cycle generates the super-resolution image, and PALM can be used for live imaging of relatively slow-moving biomolecules.

The ELYRA system uses fiber-coupled lasers at four different visible wavelengths – 405, 488, 561 and 642 nm – to excite and bleach molecules, along with a back-thinned iXon 897 electron-multiplying CCD camera from UK-based Andor Technology for image detection 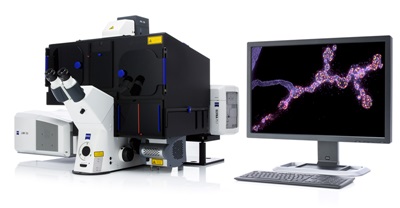 With the Zeiss kit, researchers can also choose to use either structured illumination microscopy (SR-SIM) or PALM for imaging, as the new ELYRA module combines both technologies in a single system.

It can also be integrated with the company’s laser scanning microscopes, or even with Zeiss’ scanning electron microscopes, allowing scientists to navigate between information from different imaging modes.