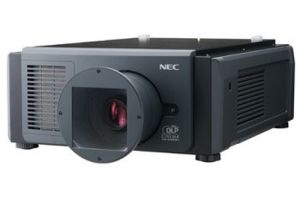 The economic benefits and practical advantages that can accrue from exchanging xenon lamps in projection systems for laser- or LED-based light engines have only become more clearcut in the years since the technology first became feasible.

In addition to a potentially beneficial berth in full-scale digital cinema installations, where 3D films have strained the capabilities of traditional lamp-based units, laser projection technology is now working its way into systems targeted at home cinemas, boardrooms and classrooms.

And the technology continues to develop. "There have been multiple approaches taken to laser projection platforms, and the terminology is still not precise," commented Peter Ludé, a digital imaging consultant based in San Francisco. "Early techniques involved the use of laser beams scanned directly across an external screen surface, either as spots or linear stripes and modulated for luminance and chrominance, but the common platforms today are modeled on the internal architectures of lamp-based systems."

Some of these involve using spatial light modulators (SLMs), often based on liquid crystal on silicon or DLP technology, acting on the outputs of individual laser diodes. New Hampshire-based Laser Light Engines (LLE) has honed its own version of this approach for digital cinema, using a light engine producing red, green and blue primaries from the same laser source and coupling the output to a digital projector using optical fiber.

"An alternative approach that has become very popular, especially for lower power projectors, is using a laser diode to excite colored phosphors to create an overall light source, which is then directed onto a SLM," said Ludé.

These "hybrid" systems are already exploited in smaller-scale projection systems, and look set to expand into new sectors. Osram already employs the technology under the Phaser brand for projection and medical-instrument applications, and recently indicated that it had applied the same approach to the development of automotive headlight units.

LEDs can also sometimes be involved. "Laser projectors are seen as an enabling illumination technology for image projection, but economics and development costs mean it can in some cases be easier or more cost effective to drop in red LED diodes instead of relying on a red laser or red emissions from phosphors," noted Ludé. "The technology is changing rapidly, there are several implementations."

As a result, laser projectors now come in a variety of sizes and power levels for different purposes. Christie recently announced a deal to supply a projector capable of 60,000 lumens to the Cinerama Theater in Seattle, said to be the world's first permanent commercial digital cinema laser projection installation after many lab demonstrations and private evaluations.

NEC has also introduced a commercial digital cinema product, a model capable of 5,000 lumens to fit with Japanese laser regulations but whose illumination platform can be scaled to higher outputs. The NC1040L system carries a price tag of $170,000 - an indication that purchase prices may remain a hurdle for the technology.

At the smaller end of the scale, business is more brisk. Corporate and classroom laser projectors, starting at 2,000 lumens, are available from manufactures including Sony, Panasonic, Casio. Several different models are already on offer for this kind of application, which is likely to be a large market for the technology. 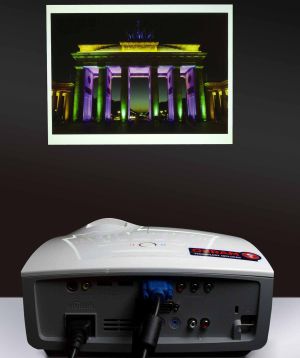 Laser projectors for classroom and boardroom

Optical properties
The initial expense of laser projection may well be clawed back through lower running costs and longer lifetimes, but doubts about the optical properties and fidelity of a laser projector have proven hard to quash. Ludé believes that manufacturers have now tackled the areas of concern.

"Speckle has been a much-discussed issue," he said. "The nature of the coherent light source causes potentially high degrees of speckle contrast ratio, which is very undesirable for image projectors. But recent demonstrations and evaluations by Hollywood studios show that speckle seems to be conquerable and well under control."

Another potential concern has been how consumers discern such an image, and whether the effects of narrow bandwidth emitters influence the perception of artistic images such as those in a cinema environment.

"Both speckle and the perceptual factors are system engineering issues rather than anything to do with the laser sources," commented Ludé. "They concern diversity in wavelength and phase and angular emission, and to tackle them might involve changing the cluster of laser emitters or combining the optical outputs in a way that provides wider spectral bandwidth and phase diversity. Lots of work has been done by projector manufacturers on this and the results being demonstrated now are excellent."

Another long-standing challenge has been the development of suitable direct-diode green sources, which Ludé agrees is still a big issue: "Most implementations today still use frequency-doubling to obtain their green illumination, but developers agree that improvements in this area offer opportunities to improve wall plug efficiency and wavelength diversity. It's still a challenge, but Osram and Nichia are making very good progress."

Regulatory issues
One consequence of these rapid devlopments has been a realization that laser projectors are not well served by existing standards and regulations, or by being automatically classified as laser devices. The Laser Illuminated Projector Association (LIPA), a body Ludé helped to create, has applied itself to this particular issue, among others.

"Because these systems involve a laser embedded in a device, they fall under laser regulations for both the US FDA and Europe's IEC, even though the output is optically equivalent to lamp projectors. This creates a big obstacle to adoption," he noted.

Persuading the regulatory bodies to recognize that the light output from a laser projector is homogenized with radiance levels many orders of magnitude lower than a typical laser beam required a coordinated approach. The LIDA has brought together more than two dozen interested parties, including LLE, Christie, NEC and Barco to argue their case.

"When evaluating the safety of emission of projectors, the characteristic that you care about is the radiance, not its coherence or monochromaticity," said Ludé. "But there was initially no published evidence to back that up. We have commissioned a study, to be published in 2014, showing that the projector radiance does indeed not depend on whether it involves a lamp or a laser in its platform, and that laser projectors are just as safe as lamp projectors from an optical standpoint. This is an example of an important LIPA activity; it was an issue that needed a proponent."

International standards will soon accommodate that view, with a new section to be added to the relevant IEC 60825 standard recognizing that radiance outputs from laser projectors below a certain threshold can be treated as lamp emissions, even though the device itself is still classed as a laser device. This should in turn smooth the path for developers to tackle new markets.

"This is still early days for laser projection, and manufacturers are looking at what markets make most initial sense," said Ludé. "As laser OEM costs decrease and performance improves, we will see them become more broadly applied. They are a very exciting solution to some vexing problems, and the digital cinema community is chomping at the bit."