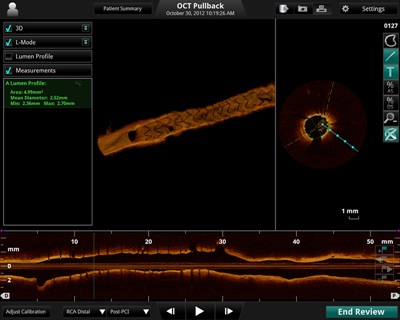 Healthcare giant St Jude Medical has launched its optical coherence tomography (OCT)-assisted system for imaging coronary arteries in the US, following approval by the Food and Drug Administration (FDA).

Its “ILUMIEN OPTIS PCI Optimization” system is designed to provide physicians with a comprehensive tool for assessing patients with coronary artery disease (CAD). It will be on display for the first time in the US during the 2013 Transcatheter Cardiovascular Therapeutics (TCT) scientific symposium, which is being held next week at San Francisco’s Moscone Center.

The OCT imaging part, which is based on technology originally developed by Jim Fujimoto and colleagues at the Massachusetts Institute of Technology (MIT), generates a three-dimensional reconstruction of a patient’s blood vessel in real time.

Clinical trials have demonstrated that this makes it easier for physicians to visualize the area they are treating, and the latest version of the system offers twice the resolution of an earlier generation. That allows for better examination of diseased arteries, aiding the placement of stents that are positioned to keep the blood vessels open.

Eye-opening imagery
In a statement from St Jude, Matthew Price, director of the Cardiac Catheterization Laboratory at Scripps Green Hospital/Scripps Clinic in La Jolla, California, said: “The ILUMIEN OPTIS is an advancement that offers an eye-opening perspective of the coronary arteries, providing me with a more complete understanding about the extent of the patient’s disease.”

“The high-definition, three-dimensional format and the new stent placement tools allow me to create a treatment plan tailored for each patient’s unique vasculature – and to confirm that I get the best possible stent result. That makes my life easier and helps the patient, too,” he added.

The OCT part of the system uses St Jude’s “Dragonfly Duo Imaging” catheter to capture near-infrared light. It is combined with a wireless sensor that measures pressure differences in blood flow within the coronary arteries leading to the heart, and thus determines the severity of any narrowings or blockages.

The FFR and OCT measurements captured by the ILUMIEN OPTIS system allow physicians to more easily differentiate between types of plaque build-up, and determine if the narrowed arteries are causing a restriction in blood flow (known as ischemia), ultimately assisting in stent placement.

“This next-generation system is a scientific advancement that delivers critical information to physicians about the location and severity of disease within the coronary arteries,” he said.

St Jude will be showing off the technology at its booth at TCT between October 29 and 31.