University of Twente researchers say that their dual-laser system will offer a resolution of 2 mm when upgraded. 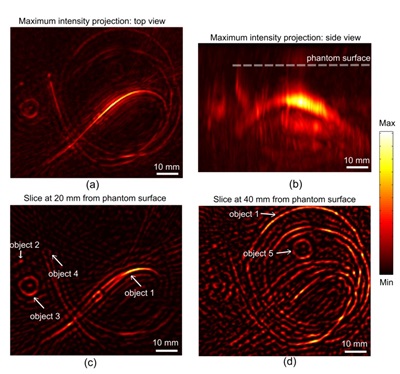 Tests on a prototype photoacoustic imaging system built by scientists at the University of Twente in The Netherlands suggest that a clinical version could offer a viable and ultimately much cheaper alternative to conventional breast cancer screening.

In a paper just published in the OSA journal Biomedical Optics Express, the Biomedical Photonic Imaging research group led by Wiendelt Steenbergen describe trials of a dual-laser system on phantom samples that mimic the behaviour of breast tumors.

They found that the prototype could detect phantom tumors with a spatial resolution of 2 mm and a vertical resolution of 6 mm – although the team says that the latter figure could be easily improved to 2 mm in a clinical system by adding more ultrasound detectors.

With the existing system capable of visualizing objects up to 40 mm below the surface of the phantom material, and over a wide field of view, it appears to be well suited to full breast screening.

And while the image resolution may not be as fine as that possible with either magnetic resonance imaging (MRI) or X-ray mammography, photoacoustic technology has the potential to be far cheaper than either of those techniques.

"We feel that the cost could be brought down to be not much more expensive than an ultrasound machine when it goes to industry," said Wenfeng Xia, first named author on the paper and a graduate student at Twente.

Those signals can be detected and reconstructed to generate an image showing the extent of optical absorption – and therefore tissue heating – inside the target. Since cancer tumors have more blood vessels than the surrounding tissue, they are distinguishable in photoacoustic images.

One drawback of the current Twente prototype is the time required to generate an image. In its current configuration, an acquisition time of one hour would be required for a full breast scan, but the researchers say that this can be reduced to just ten minutes, simply by upgrading the data acquisition card.

Those pulses are coupled into a fiber bundle, with a single input beam converted into nine output beams that illuminate the breast phantom. The longer Nd:YAG wavelength is used because it penetrates more deeply into breast tissue, where it is absorbed mostly by oxy-hemoglobin in blood vessels.

However, the 1064 nm wavelength is also absorbed by water, lipids and collagen to some degree, and this is why the second laser wavelength, where absorption by water and lipids is low, is also used.

Clinical upgrade
The latest work follows another trial by the Twente team last year, in which results from their photoacoustic mammoscope compared well with those from histopathology and showed better contrast than conventional X-ray mammography. In that work, the image resolution of the system was 3.5 mm.

The next step for the team is to upgrade and prepare a new prototype for larger, multi-center clinical trials, in which the photoacoustic mammoscope would have to prove at least as effective as existing imaging techniques.

"We are developing a clinical prototype that improves various aspects of the current version of the device,” said Twente associate professor member Srirang Manohar. "The final prototype will be ready for first clinical testing next year."