Cost-cutting will see consolidation of optics and laser production by thermal imaging giant as it reacts to US government ‘uncertainty’. 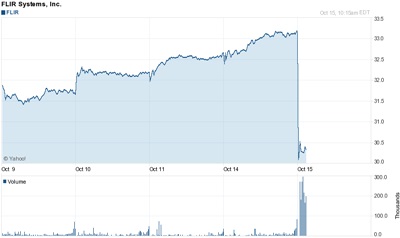 FLIR Systems, arguably the world’s leading company in the infrared imaging sector, is to slash its cost base with a restructuring that will close six sites across the US and Europe.

Shares in the Portland, Oregon, company slumped in value by close to 9% when markets opened shortly after the announcement, likely a response to a downward revision of financial guidance for the quarter that ended on September 30.

FLIR announced that it would “realign” multiple production and engineering organizations, with the aim of slimming down its global operations in a bid to develop and manufacture products more quickly and at a lower cost.

In short, that means the closure of up to six “not-to-scale” sites across the US and Europe, with operations at the closing sites set to be transferred to the company’s larger facilities.

“FLIR also intends to consolidate its optics and laser manufacturing businesses to better realize the benefits of vertical integration in these areas,” read a statement.

The company did not specify which sites were set to close, or how many jobs would be lost as a result, but the company’s management expects to save more than $20 million per year once the closures are completed.

Ahead of that, though, FLIR will record a pre-tax restructuring charge of between $27 million and $30 million in the fourth quarter of 2013 as a direct result of the cost-cutting actions.

Strategic review
FLIR’s CEO Andy Teich said that the decisions had been made following a strategic review that took place in the summer, moves that he hoped would “further enhance operating efficiency and profitability and improve our internal execution with better communication, collaboration, and cooperation across the company”.

Having grown rapidly in recent years following a number of significant acquisitions, FLIR makes a wide range of photonic components that are used in its various detector components and surveillance, reconnaisance and imaging systems. It has what it describes as "primary production facilities" in Sweden, Estonia, France, and Canada, as well as the US.

As of the end of 2012, the company’s headcount numbered 2962 employees. That was 100 fewer than was the case a year earlier, after FLIR had already taken some cost-cutting measures in the wake of lower spending by the US military and sequestration delays.

Bureaucracy blues
The current US federal shutdown is not making that situation any easier to manage, and Teich also announced that FLIR’s financial results for the third quarter of fiscal year 2013 would be worse than previously anticipated.

“Third quarter preliminary results were negatively impacted by weakness in markets that have exposure to the US federal government,” the firm stated, although this appears to be primarily due to additional bureaucracy, rather than the federal shutdown or general squeeze on military spending.

“Extended procurement and export licensing processes at federal government agencies caused shipments to be lower than anticipated in FLIR's surveillance segment,” said the company, whose cores and components line of business has also been affected.

"While we are disappointed in the preliminary results for the third quarter, we have also taken steps, above and beyond those related to our strategic review, to reduce costs in response to the current operating environment, and we remain highly confident in our strategy and outlook for the future," said Teich.

"Ongoing uncertainty in the US government is likely to continue to affect our performance in the fourth quarter, and our revised guidance is intended to reflect this environment.”