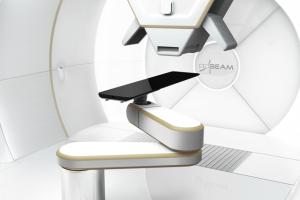 Treating cancerous tumors with a beam of photons is an established therapeutic technique, one familiar to patients undergoing X-ray radiotherapy.

But photons are not the only option. Using a beam of high-energy protons instead holds some advantages, and proton therapy has been investigated as a potential means to treat certain specific cancers for some years.

Both forms of treatment aim to achieve the same end result, since protons and photons have a parallel destructive effect on the DNA of the targeted tumor cells, disrupting cell proliferation or killing them off entirely.

In practice, however, radiotherapy can lead to significant damage to healthy tissues surrounding the tumor, caused as the photons release their energy into neighboring healthy cells. Protons, having a classical size and mass, behave differently, unloading their energy within a small designated volume and causing less collateral damage.

One catch with proton therapy is the difficulty in producing the beam of protons in the first place, a task which traditionally requires the use of a suitable particle accelerator such as a cyclotron or synchrotron - expensive pieces of hardware.

Laser proton therapy (LPT) might be one answer. "A high-power laser directed in a vacuum at metal foils a few microns thick generates protons when the laser interacts with impurities such as water or hydrocarbons on the surface of the foil," explained Ken Ledingham of the University of Strathclyde.

Although still not a trivial procedure, this method offers a significantly cheaper and relatively convenient route to generate a beam of protons. "Conventional particle accelerators are very expensive, costing perhaps €150 million in capital costs" noted Ledingham. "A laser facility to produce the proton beams should be significantly less expensive, costing perhaps €10-20 million."

Certain tumors in certain places
The roots of LPT and the idea that a laser could be used to generate a suitable proton beam go back 14 years, but the technique requires laser parameters that now fall within the reach of advanced short-pulse high-power systems, albeit those usually found in large-scale installations.

"Sources need to supply picosecond or femtosecond pulses at 700-800 nm, which are certainly realistically available, although suitable high-power lasers tend to be tied up with plasma physics research at present," commented Ledingham. 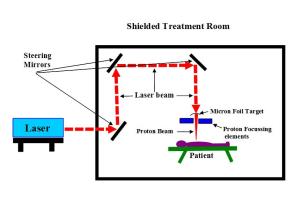 Strictly speaking, particle accelerators produce a 'DC' beam of protons, which the laser-driven version would not thanks to the pulsed nature of the source; but all experiments indicate that protons in LPT kill cancer cells as effectively as those from accelerators.

Even so, Ledingham stressed that the procedure will not become a panacea for all cancers, or even for some of the most common conditions; prostate cancer, for example, is unlikely to be a practical target for LPT. Tumors located within reach of realistically feasible proton beams represent better candidates.

"There are some tumors where protons can do considerably better than X-rays," he said. "These include cancers in children; in the skull; and in the spine. Proton beams for treatment of ocular tumors need to have energies of only 50-70 MeV, but deeper sited tumors would need stronger beams, perhaps 250 MeV."

Emerging nations
Further developments in the field of LPT will include investigations into ways to increase the beam power, but at present limited access to suitable research facilities is one factor that is hindering progress.

Stronger ties between relevant engineers and medical professionals should help to address that hurdle, and a Clinical Laser-Proton Therapy Working Group was created in 2011 to bring all parties together for mutual benefit, with Ledingham as a member.

That working group held its second meeting in September 2013, a gathering supported by Varian Medical Systems of California. Varian already offers a number of cancer treatment systems, including radiotherapy, along with a proton beam system based around a superconducting cyclotron proton accelerator - a component weighing 90 tons, according to the company's product information.

Varian's presence alongside other industry partners on the working group suggests that equipment vendors recognize the significance that LPT could have. At present there is no laser developer on board, although Ledingham noted that Siemens has had a watching brief on the technology for some years.

Ledingham is also one of the prime movers behind a new grouping, the International Initiative for Laser Acceleration Applied to Bio-Medicine, Imaging and Diagnostics, which arose from a session at the 2013 SPIE Optics + Optoelectronics conference devoted to medical applications of laser-generated particle beams.

Both consortia demonstrate the growing attention being paid to LPT as the technique potentially moves closer to clinical trails. Ledingham believes that LPT trials on tumors within animals could come within two years, although regulatory considerations could affect that timetable. Nations with limited financial resources may be paying particular attention.

"The economic savings make LPT attractive for emerging countries, and the government of Turkey are very interested in establishing a site at Konya," Ledingham noted. "The expense of a particle accelerator is beyond them, but LPT technology is a promising alternative."