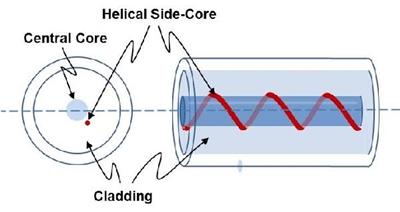 nLight, the semiconductor laser maker based in Vancouver, Washington, has acquired the high-power fiber laser start-up Arbor Photonics for an undisclosed sum.

The University of Michigan (UM) spin-out, which is based in Ann Arbor, has pioneered the development of a proprietary technology it calls “Chirally-Coupled Core” (3C).

The patented approach, which Arbor licensed exclusively from UM in August 2008, is said to enable state-of-the-art high-power fiber lasers with peak powers of up to 100 kW.

“The Arbor Photonics team and 3C technology are a valuable addition to nLight,” said Scott Keeney, the firm's president and CEO, in a statement announcing the deal. “Vertical integration of core technology is critical to our growth strategy.”

Those shorter wavelengths are seen as increasingly important for fine materials processing applications, and the fiber laser market leader IPG Photonics has recently launched such products.

The "3C" concept
According to Arbor, the “3C” concept is based on a revolutionary type of optical fiber that features an internal structure designed to produce single spatial mode output from very large mode area fibers. The concept was invented at the University of Michigan’s Center for Ultrafast Optical Science by Almantas Galvanauskas - who is also Arbor’s chief scientist.

The performance is achieved by introducing two waveguides within the fiber structure, according to US patent 7,424,193. Those waveguides feature a large-diameter central core and a smaller, off-center, “side core”. The side core is helically wound around the central core, close enough to interact with laser modes that are propagating through the central core.

With the appropriate design, phase-matching conditions are created that couple higher-order modes into the side core, where they are then radiated out into the fiber cladding. “This structure favors single-mode operation by design and provides an extremely robust output beam,” notes the company.

Equity funding
nLight, which first emerged as a start-up amid the optical telecommunications boom in 2000, now sells a wide range of high-power laser diodes aimed primarily at industrial, medical and defense applications.

In August 2011, the venture-backed company attracted $17.5 million in its series E financing round, while an SEC filing dated January 2, 2013, revealed that the firm had raised a further $3 million.

At the time of the series E financing round, Keeney said that following the successful launch of its multi-kilowatt laser platform nLight had registered more than $60 million in order bookings for the first half of 2011.

Arbor, which was incorporated in 2007, had raised $2.25 million in equity funding according to the company’s own March 2009 SEC filing. In September 2010, the company also won a Phase 1B Small Business Research Innovation (SBIR) funding extension from the US National Science Foundation to continue developing the technology for potential applications in extreme ultraviolet (EUV) plasma generation – something requiring very high laser drive power.