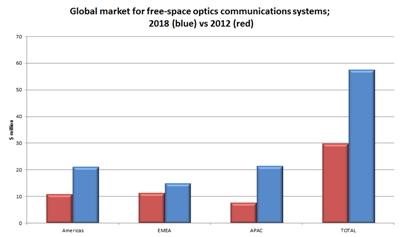 A new forecast by market researchers at ElectroniCast Consultants suggests that the market for devices used in commercial free-space optical (FSO) communications systems will near-double by 2018.

However, such is the niche appeal of the technology that, outside of military use, the total market will still be worth less than $60 million by the end of the forecast period.

According to ElectroniCast’s white paper, in 2012 the global market for devices used in commercial FSO links grew by 13% on the previous year, reaching just shy of $30 million.

Over the next five years the market is expected to expand at a modest rate overall, although growth will be more rapid in the Asia-Pacific region (19%) than elsewhere. In contrast the EMEA region – currently the largest of the three with a market estimated at $11.4 million last year – will grow at a measly 4.6% and be the smallest of the three by 2018.

Meanwhile, deployments in the Americas are forecast to grow at a compound rate of around 12% to reach $21.2 million by 2018.

“The increase in the consumption of FSO links in the Americas region will be attributed to not only continued upgrades and network facilitation in the US and Canada, but also from the accelerating economic growth of major cities in Latin America,” stated Electronicast.

Its researchers believe that while the APAC region already has advanced communication technology in Japan and elsewhere, there is scope for FSO deployment in some countries, such as Australia, China and India.

“The APAC region has rapidly expanding market opportunities and therefore the forecast shows this region with the fastest annual growth,” Electronicast says. 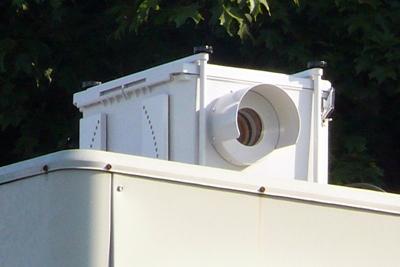 Military opportunity?
FSO systems do have certain advantages over conventional fiber-based optical communications, in that they can be deployed in a matter of days, without recurring monthly costs or tricky rights of way issues to negotiate with municipalities or businesses.

However, the technology has in the past been prone to disruption by bad weather, meaning that a stringent back-up, typically radio frequency, communications technology is needed for redundancy - something that ElectroniCast admits is a “huge roadblock to carrier acceptance”.

There are few signs of that changing, although in September 2012 a new company called LaserLight Communications said that it was hopeful of deploying a 12-satellite constellation based on all-optical communications by 2017 – provided that it could raise the $2 billion or so private equity finance that would be required for launch. Neither the company or its parent, Pegasus Global Holdings, has made any subsequent announcements about the proposal.

Electronicast’s forecast does not cover military applications, but the ease with which a secure FSO can be set up in the field does suggest that this is likely to be a more attractive market for many suppliers.

Last September, for example, the US Navy awarded a $7 million contract to US companies ITT Exelis and Novasol to develop an FSO system suitable for at-sea use. At the time, Novasol’s John Sender said that moving high volumes of data with a line-of-sight laser communications system had become a cost-effective and reliable method, in contrast to early attempts that had often fell foul of bad weather such as heavy rain, snow or fog.

Schott and Space Photonics told optics.org that they expected to install ten LaserFire systems during 2013, with the volume growing to 100 by 2015 as key manufacturing technology was developed at Schott.