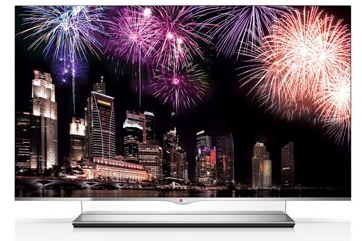 Large-size, ultra-thin organic LED TVs are finally ready to go on sale, after LG confirmed the commercial launch of its 55-inch sets at the Consumer Electronics Show (CES) in Las Vegas, US.

The Korean company, which had previously aimed to launch the technology last year, is to begin taking orders in Korea this month, with deliveries set to start in the first week of February. The cutting-edge TVs will go on sale at an initial price of KRW 11 million (approximately $10,000), with a US launch pencilled in for March - albeit at an even higher price, according to cnet.com.

Without the need for a backlight, the OLED TVs are just 4 millimetres thick and weigh around 10 kilos. “We believe that OLED will usher in a whole new era of home entertainment,” says Havis Kwon, CEO of LG’s Home Entertainment Company. “Not since color TV was first introduced 60 years ago has there been a more transformational moment.”

LG and Samsung had each showed off a pre-commercial version of their OLED TVs at last year’s CES, building on their expertise in the smaller active-matrix OLED technology that Samsung in particular has pioneered for use in mobile phone handset screens.

With their potential for extremely thin designs and ultra-vivid image reproduction, OLED displays have long been tipped to make an impact in the TV market, though it has been more difficult than originally expected to make the leap from small screen to large. 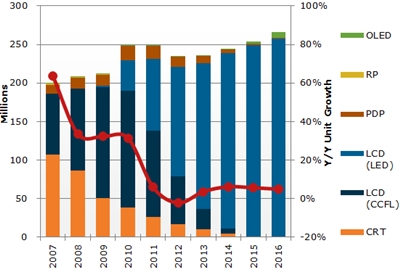 3% share by 2016
The overall TV market, dominated by LCDs backlit with either fluorescent or LED lamps, is expected by NPD DisplaySearch to be worth around 235 million units in 2012 – falling from the figure of 250 million seen for both 2010 and 2011.

One major change in 2012 was the proportion of shipped TVs that featured LED backlights. They now represent approximately two-thirds of all TVs – up from around 40% in 2011. DisplaySearch is now predicting that only by 2015 will the TV market be creeping back to the 250 million-unit mark seen last year.

By then, OLED TVs should have dropped in price sufficiently to begin making an impact, although they will still likely represent only a high-end niche product. DisplaySearch currently reckons that around 7 million will ship in 2016, a figure that would represent less than 3% of the market.

That could explain why Samsung, which is yet to announce the commercial availability of its own OLED TVs, now appears to be focusing on enhanced versions of LED-backlit technologies with ultra-high resolution and higher luminous intensity instead.

LG is also showing off its 100-inch laser projection TV in Vegas, saying that it will provide the closest approximation of cinema viewing yet to be made available in the home, as well its own new ultra-HD models for the high-end market.