Laser analysis of structure of trypanosomal protein a “scientific breakthrough” of 2012. 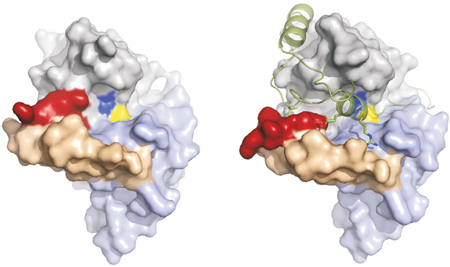 Laser assisted: discovery of 3D structure of Cathepsin B.

Supported by the world’s most powerful X-ray free-electron laser, an international team of researchers, including scientists of the Max Planck Institute for Medical Research in Heidelberg, Germany, has gained new insight into the structure of a key protein in the fight against deadly sleeping sickness.

Science magazine has chosen the experimental study as one of the top ten scientific breakthroughs of the year.

Sleeping sickness is caused by the unicellular organism Trypanosoma brucei, which is transmitted by tsetse flies. The disease kills about 30,000 people word-wide each year. The currently available drugs against the disease are of limited efficacy and can have severe side effects. Moreover, resistance against them is increasing.

A promising drug target is the protein Cathepsin B whose enzymatic activity is vital for the parasite’s survival. Inhibitors of Cathepsin B need to be highly specific against the trypanosomal variant because it resembles the human form.

The team’s research provides detailed insight into the structure of trypanosomal Cathepsin B in a natively inhibited form that might serve as a blueprint for the rational design of drugs. The biologically important form of the protein was obtained by a trick: instead of crystallizing the protein in plastic trays in the lab, it was crystallized in vivo in the cells that produced the protein. This approach provides natively modified proteins, but the crystals obtained are tiny.

The use of the X-ray free-electron laser (FEL) at Stanford University, Ca, USA, was essential for the work. Protein structures are typically determined by exposing crystals of the protein to X-rays. Unfortunately, many of the most interesting proteins, such a membrane proteins, do not form crystals of sufficient size for analysis by conventional X-ray sources.

Measurements using tiny crystals have now become feasible thanks to the extreme intensity of FELs, whose ultrashort pulse durations outrun most radiation damage effects. It is these properties that allowed structure analysis of the tiny in vivo-grown Cathepsin B crystals.

Using a model system, the Heidelberg researchers and their international colleagues had previously validated this new approach using FELs as a tool for structure analysis, an important step in the method development that published in February 2012 in Science.

The latest research demonstrates for the first time FEL use to obtain new biologically important information. The team shows in detail how the structures of typanosomal and human Cathepsin B differ and how the naturally occurring native inhibitor binds . They say that this result could provide new ideas for designing drugs against sleeping sickness.