US Navy awards $7M contract for ITT Exelis and Novasol to build a line-of-sight system to handle escalating data needs. 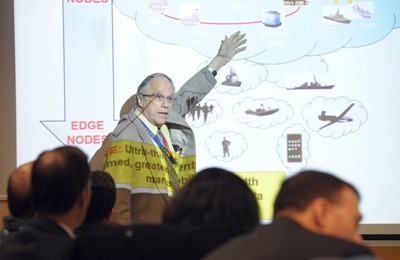 The US firms ITT Exelis and Novasol are to complete development of a high-bandwidth, free-space laser communications system suitable for at-sea operations, under a new $7 million contract awarded by the US Navy.

The system will be designed to transfer intelligence, surveillance and reconnaissance (ISR) data between ships and from ship to shore, and is set to be used by the Navy and the US Marine Corps.

ISR data is a fundamental part of military operations, but the proliferation of multi-spectral information generated via platforms such as unmanned aerial vehicles (UAVs), satellites and high-altitude planes is becoming increasingly difficult for conventional communications systems to handle.

The problem was highlighted by Regina Dugan, the former director of the Defense Advanced Research Projects Agency (DARPA), at last year’s SPIE Defense, Security and Sensing show in Orlando, Florida.

At the time, Dugan remarked that, having spent billions of dollars developing ISR technologies, the US armed services now faced a “monumental and escalating” task to handle all of the information produced and – more importantly - to make sense of it. “We are swimming in sensors; drowning in data,” she said, urging delegates to help develop “an internet for sensors”.

“Your own traffic lane at rush hour” Now it seems that free-space optical communications could provide part of the answer to that data challenge. Gary Tarantino, manager of advanced systems and strategic initiatives at Exelis Electronic Systems, said in a statement announcing the contract award that today’s US military missions required handling data at a rate of 3 GB per second.

“Using laser communications gives our forces the information they need without competing with radio frequency transmissions,” he added. “It’s like having your own traffic lane at rush hour.”

The laser technology has been in development for several years in collaborations funded by the Office of Naval Research and the Naval Research Laboratory (NRL), with Exelis and Hawaii-based Novasol closely involved.

John Sender, vice president of employee-owned Novasol, said that moving such high volumes of data with a line-of-sight laser communications system was now cost-effective and reliable. That is in contrast to early attempts to develop similar systems for commercial use, which often fell foul of bad weather such as heavy rain, snow or fog.

The two companies say that they have successfully field-demonstrated the laser capability, and participated in US Navy exercises to improve the technology so that it worked over extended distances and in poor weather.

On its web site, Novasol says that its 1550 nm free-space optical communications “compact interrogator” comes with a gimbal for autonomous use on moving platforms (such as ships), supporting a 10 Mb/s downlink and a 2 Mb/s uplink.

Back in 2008, the company was awarded a $9.8 million contract by the NRL to develop cheap, compact interrogator terminals that could be used in UAVs.

Under the latest contract, ITT Exelis will lead systems engineering, product development and production, while Novasol will engage in the design and development of the required laser communication technologies. The two companies add that future plans including the development of similar laser networks for mobile and special operations forces.