A move to a licensing model puts the company's pico-projector business on a sure footing, says its vice president of R&D. 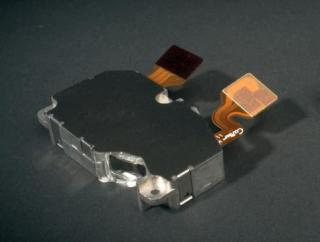 After a period in which supply of suitable green laser sources and the changing schedules of other companies had put its cash flow under some strain, MicroVision's Dale Zimmerman believes that calmer waters lie ahead.

Speaking to Optics.org, the vice president of research and development indicated that a recent change to the company's business model would deliver more stable finances and begin to unlock the potential markets for MicroVision's PicoP pico-projector systems, as the technology enters its second generation and incorporates direct-diode green lasers.

"In our first-generation product we designed and contracted with an ODM to build an entire light engine and in some cases an entire product," he said. "Now we have transitioned to a role as a provider of component technology, with system-level understanding of how to make the scanned-beam light engine in a working pico-projector. Our core component knowledge is in the MEMS scanning mirror itself, and in the electronics and algorithms that control that mirror and the lasers to make a precise display."

The first fruits of that change came in the shape of the recent licensing deal with Pioneer, which MicroVision says is worth a total of $5.8 million, and which will see the Japanese company use the second-generation PicoP technology in head-up displays (HUDs) for the automotive market.

That product, called Cyber Navi and positioned as an after-market add-on, commenced shipment in July 2012, using a light engine manufactured by Pioneer itself from MicroVision components. Other OEMs are evaluating the technology for their own uses, under the same "Image by PicoP" license.

Cash flowing
Among its other advantages, a shift in business model will benefit the company's balance sheet, lowering cash requirements as the OEM partners assume a greater portion of the cost involved in integrating the PicoP display engine.

"The advantages of the license model is that it greatly reduces our need for working capital, by not having to go through the whole manufacturing cycle," commented Dawn Goetter, director of marketing communications, to Optics.org. "We have a lot more flexibility in who we are talking to and how they bring the products to market." 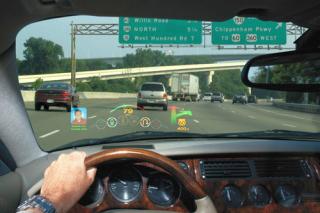 During MicroVision's second-quarter 2012 conference call in August 2012, the company indicated that the reduction in working capital, operating expenses and personnel costs would result in a 50 percent reduction in funds used in operations in the second half of 2012 compared to the previous year, to the general improvement of the company's cash flow. Net loss for the second quarter was $5 million, compared to $9.2 million for Q2 2011.

Having finished 2011 with $13.1 million in cash and equivalents on its balance sheet, MicroVision raised $10.5 million in a public stock offering in July 2012, on the heels of a $5 million equity investment during May 2012.

"We have funding that carries us for at least a year," confirmed Zimmerman. "Lowering our operating expenses give us more of a runway to develop new customers for second-generation systems, and also to do the engineering for the generation after that."

It's now easier to be green
One key to the forward progress of PicoP has been the opportunity to use direct-diode green laser sources, long recognized as the best route to compact and efficient pico-projector units and long in-the-works from several suppliers.

MicroVision's first-generation PicoP system employed frequency-doubling to provide its green laser light, due to the lack of readily available direct-diode green sources at the time. But suitable sources are now arriving: Sony recently announced a partnership with Sumitomo to manufacture direct-diode green lasers, and Zimmerman indicated that he believes others will soon join them.

"We believe direct-diode green lasers are finally here for real," he said. "The production product that Pioneer is shipping is based on a direct green laser, which was one of the key factors enabling us make a second-generation engine with robust performance and a long lifetime. We are confident that as volume expands we'll see the pricing of the diodes come down dramatically, along with further improvements is efficiency, and anticipate that red, blue and green direct-diode lasers will be broadly available."

That should lead to rapid penetration in markets such as automotive HUDs, where several manufacturers will be looking to improve upon the quality of the display systems they are already developing or installing. Smartphone applications are likely to follow, although integration of a projector into the chassis of the phone itself is likely to proceed at a slower pace. 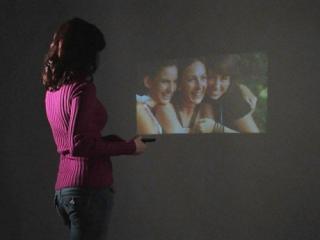 Pico-projection from a smart phone

Early adoption
Smartphones usually adopt secondary features once that particular function has been well-proven as a stand-alone technology, and Zimmerman expects that the incorporation of pico-projection capability is likely to follow the same pattern.

"There needs to be a little more pull before the cell phone manufacturers and the carriers adopt it. However, the concept of a separate cradle which attaches to the regular phone and provides pico-projector capability seems promising. That would bring the technology within reach of those early adopters who really want it - which in the cell phone market could be several millions of people."

Such early adopters will also have noticed the arrival of the Samsung Galaxy Beam, the latest iteration of Samsung's long-standing plans for projector-smartphones, that recently launched in the UK incorporating a 15-lumen projector. During the August conference call, MicroVision CEO Alex Tokman welcomed the arrival of that model to the market, while noting that it provided one-quarter of the resolution available from the PicoP system.

"We know that manufacturers like Samsung have been experimenting with larger handsets, in order to incorporate high-quality projector units," agreed Zimmerman. "We are saying that with our technology, a pocket device can produce a compelling 2-foot display in ambient lighting, and if you are willing to go into a dark room you can have a home theater experience from a pocket device. There is plenty of evidence that a high-quality image is valued by consumers, and that is the space we are trying to play in with projector displays."