Japanese maker of lithography light sources says that it is first to surpass commercially significant milestone. 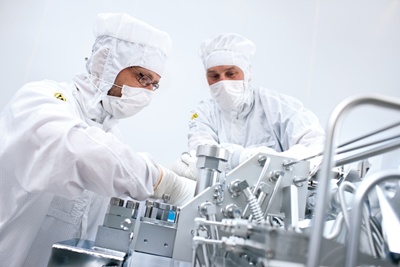 Gigaphoton, one of the companies that is developing light sources for the forthcoming generation of extreme ultraviolet (EUV) lithography tools, claims to have passed the key milestone of 5% conversion efficiency with its laser-driven source.

The Japanese firm is competing with US-based Cymer and compatriot Ushio to provide EUV sources for ASML, which has begun integrating its first production lithography tools to offer the feature-shrinking technology and is set to begin shipping them in late 2012 or early 2013.

Gigaphoton and Cymer are working on laser-produced plasma (LPP) sources, but one of the main problems with the approach has been the very low efficiency with which laser power is converted into EUV emission. The laser-driven sources being developed by Cymer and Gigaphoton both rely on blasting droplets of tin with a high-intensity carbon dioxide laser to create the EUV output.

“Gigaphoton has set a new industry [efficiency] record for a second time with its proprietary pre-pulse laser technique,” reported the company in its release. “This achievement of production-level [efficiency] is a significant step toward initial shipment of a mass production model.”

Cymer, which is seen as the most advanced of the EUV source companies in terms of commercial product development, reported earlier this year a 50 W source operating at a duty cycle of 80%, but the company’s first generation of production sources are expected to have a conversion efficiency of around only 3%.

The San Diego firm has prioritized improving the overall stability and consistency of its source – crucial for commercial deployment – as well as increasing the overall output power so that wafers can be patterned more cost-effectively with ASML’s tools. So while Cymer’s sources will almost certainly feature in the first ASML production EUV systems, Gigaphoton’s strategy is to first increase conversion efficiency performance, before entering the market at a later stage – likely some time in 2013.

Two-wavelength approach
Improving the conversion efficiency of the source is seen as one of the “big levers” for increasing EUV source power and moving towards more cost-effective wafer production. Gigaphoton believes that an efficiency of 5% is the key milestone here, and that its patented approach of using two different lasers provides a competitive advantage.

In its design, a pre-pulse from a 1 µm laser first turns each tin droplet into a more nebulized “mist” that is subsequently hit by the main CO2 pulse, which Gigaphoton says is more effective than using the CO2 laser for both pulses. The company’s own (unpublished) data now show a maximum conversion efficiency of 5.2%, and an average figure of 4.7% - achieved with a CO2 laser delivering pulses of 150 mJ.

Those figures represent a record efficiency, but the Japanese company will need to demonstrate that level of operation over an extended period and at a much higher repetition rate and output power, coupled with the kind of stability necessary for commercial operation in a semiconductor fab, before full commercialization.

Update: Gigaphoton told optics.org that the latest efficiency result was achieved with a source operating at only 2 Hz, producing an output power of 0.1 W. The source was operated for around ten minutes and efficiency decreased over that period. "Stable operation at a high repetition rate is our next challenge," said a spokesman.*

Gigaphoton president Hitoshi Tomaru said of the latest development: “This confirms our research and development path to manufacture a mass-production LPP source that ensures stable operation at higher output and lower running cost.”

Tomaru added that the work should also help to convince semiconductor device makers that EUV lithography will become a true commercial reality. They are facing bills in excess of $100 million to buy a single EUV tool, and so the technology faces huge challenges to become cost-effective.

Throughput challenges
Early EUV adopters are set to take delivery of production systems from ASML by early 2013, but those initial tools will likely feature lower-power EUV sources than had initially been envisaged, and therefore a lower level of wafer throughput. The sources will be field-upgradable, however, so that wafers will be patterned more quickly and therefore at a lower cost in the future.

At the SPIE Advanced Lithography conference earlier this year, Gigaphoton had reported a maximum conversion efficiency of 3.5% for 20 µm diameter tin droplets - the Japanese company says that this smaller droplet size is preferable to help with the EUV conversion. It is due to deliver a 50 W pilot source to ASML by the end of this year, followed by upgrades to higher output powers.

The knock-on effect of EUV lithography is an important one for the wider photonics industry, with a successful entry likely to provide a significant boost for the CO2 laser maker Trumpf, as well as many other providers of specialist optics, for example II-VI.

According to investment analyst Mark Douglass from Longbow Research, who recently visited Trumpf, the German laser maker is currently seeing “very strong growth” in CO2 laser demand, partly because of booming orders for the high-power systems required by the EUV tools.