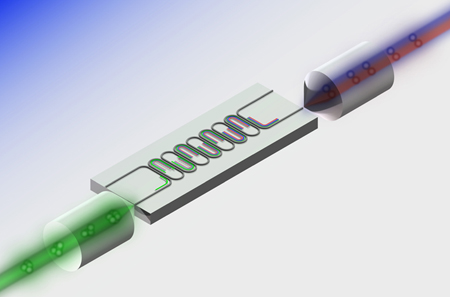 Researchers from the National Institute of Standards and Technology (NIST), the University of California, San Diego; and the Politecnico di Milano in Milan, Italy, have demonstrated the first “heralded” single photon source made from silicon in what the team is calling an important step towards more practical quantum information processing.

This novel source complements two other recently developed silicon-based technologies — interferometers for manipulating the entanglement of photons and single photon detectors, which are needed to build a quantum optical circuit or a secure quantum communication system.

The line between “interesting” and practical in advanced electronics and optics often comes down to making the new device compatible with existing technology. According to NIST scientist Kartik Srinivasan, the new 0.5 mm x 0.05 mm-sized heralded photongenerator meshes with existing technology in three important ways: it operates at room temperature; it produces photons compatible with existing telecommunications systems (wavelengths of about 1550 nm); and it is formed in silicon, and so can be built using standard, scalable fabrication techniques.

A heralded photon is one of a pair whose existence is announced by the detection of its partner — known as the “herald” photon. To achieve heralded single photons, the group built upon a technique previously demonstrated in silicon called photon pair generation.

In photon pair generation, a laser pumps photons into a material whose properties cause two incoming pump photons to spontaneously generate a new pair of frequency-shifted photons. However, while these new photons emerge at precisely the same time, it is impossible to know when that will occur.

“Detecting one of these photons, therefore, lets us know to look for its partner,” says Srinivasan. “While there are a number of applications for photon pairs, heralded pairs will sometimes be needed, for example, to trigger the storage of information in future quantum-based computer memories.”

The group’s silicon-based device can efficiently produce pairs of single photons, and the experiment clearly demonstrated they could herald the presence of one photon by the detection of the other.

While the new device is a step forward, it is not yet practical, according to co-author Professor Shayan Mookherjea at UC San Diego, because a single source is not bright enough and a number of other required functions need to be integrated onto the chip. However, putting multiple sources along with their complementary components onto a single chip—something made possible by using silicon-based technology—could supply the performance needed for practical applications.

The work was among the three finalists and received an honorable mention in the Maiman Student Paper Competition.