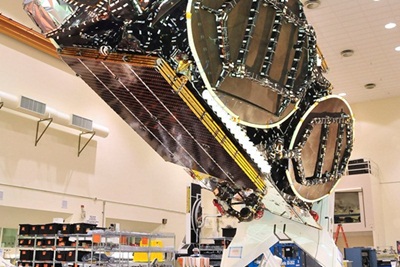 According to the Albuquerque, New Mexico, company, the Space Systems/Loral RF payload will provide Ku and C-band capacity for multiple communications applications.

Along with the Boeing subsidiary Spectrolab and Azur Space Solar Power in Europe, Emcore is one of three key suppliers of multi-junction cells used in space, where the large-area cells typically deliver a starting conversion efficiency of around 30%.

Christopher Larocca, Emcore’s COO, said in a company statement that reaching the one-hundred mark represented a “tremendous milestone” for the company, and pointed out that it had been achieved without a single on-orbit failure. He also noted the strength of the company’s order pipeline for future missions, saying:

“Emcore currently has a total of 120 more satellites under contract to be launched and powered by Emcore solar equipment over the next several years.”

Back down to Earth
The advanced semiconductor technology that features in the high-performance cells has been adapted by Emcore, Spectrolab and Azur, as well as a number of emerging competitors, for terrestrial concentrated photovoltaics (CPV) applications.

Under high concentration and the terrestrial solar spectrum, the efficiency of much smaller multi-junction cells can be increased to more than 40%, and CPV is seen as a potentially lucrative new market by the growing number of cell suppliers.

However, terrestrial photovoltaics is a far more price-sensitive market than that for powering satellite payloads, and driving down the cost of the cell technology – partly through advances in conversion efficiency - is seen as a key requirement.

Emcore is aiming to do that via its “Suncore” joint venture, established with China’s Sanan Optoelectronics in 2010, and as prices fall and cell efficiencies increase analyst forecasts now suggest that the market for installations of terrestrial CPV will swell to 700 MW by 2017, equivalent to a value of around $1.6 billion.

The bulk of that market is expected to come from utility-scale projects, because of the high up-front cost of the technology and the need for dual-axis tracking of the Sun to keep it focused on the tiny cells

But Emcore believes that a market for rooftop CPV installations will also emerge, and at last month’s Intersolar Europe trade show the company launched its “Soliant 1000” rooftop system, which promises as much as 500 W power generation under ideal conditions.