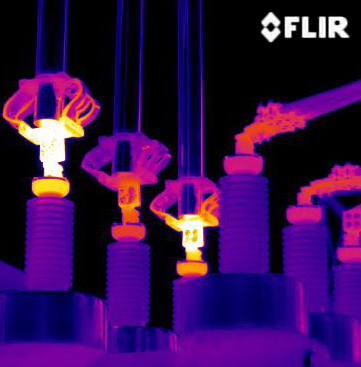 An applications report from Flir Systems details how electrical power utilities have, by using FLIR thermal imaging cameras and automation software, been able to remotely monitor impending equipment failures and security breaches at any time day or night.

By the use of thermal imaging cameras and automation software, Flir and its partners have developed monitoring systems that provide early warning of impending equipment failures such as transformer fluid leaks or internal insulation breakdown. These thermal imaging cameras can recognize differences in the heat signatures of electrical components and the surrounding background, and compare the temperatures of similar components in close proximity to one another.

Flir’s A310 model is a fixed mounted thermal imaging camera that can be easily integrated in all weather housing and installed almost anywhere to monitor critical equipment and other valuable assets. By monitoring the temperature of critical components within electrical substations the A310 assists utilities in identifying problems before they become costly failures, preventing downtime and enhancing worker safety.

Flir cites a recent example of how thermal imaging helped on unnamed utility: the company in question discovered a hot bushing rod in a substation transformer and repaired it at a cost of only €12,000. A similar problem that had occurred before the firm introduced its thermal imaging program led to a catastrophic failure that cost more than €2,250,000 to fix.

The detection of temperature increases in these components with thermal imaging cameras allows preventive maintenance operations before an unplanned outage occurs due to outright failure.

Flir manufactures, and supports thermal imaging systems and subsystems for industrial, scientific, governmental, commercial, and fire fighting applications. With a 40-year history of infrared innovation, over 100,000 systems in use worldwide, and development centres and sales offices in over 60 countries, FLIR says it is an innovator and leader in thermal imaging technology.