Results from a Dutch clinical study provide further evidence that the technique will be be a valuable diagnostic tool. 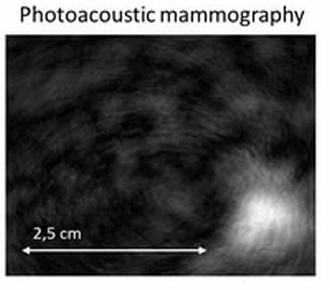 A Dutch clinical trial of twelve patients examined using a photoacoustic (PA) imaging technique has confirmed that the method shows significant promise as a diagnostic approach for imaging breast tumors and abnormalities.

Researchers at the Biomedical Photonic Imaging Group of the University of Twente, along with colleagues from Medisch Spectrum Twente hospital and the University of Amsterdam, used a photoacoustic mammoscope instrument developed in-house, and compared the results with those obtained from conventional imaging and histopathology.

The team showed that malignancies in the breasts produced a distinct photoacoustic signal, one that could be clinically useful for making a diagnosis of breast cancer. Specifically, a confined region with high contrast compared to the background could be seen in the reconstructed volumes of all ten patients who had malignant lesions,

This contrast was higher than that seen on an x-ray mammography examination, and was absent in the case of two patients who presented cysts rather than malignancies.

"While we're very early in the development of this new technology, it is promising," said Michelle Heijblom of the University of Twente. "Our hope is that these early results will one day lead to the development of a safe, comfortable, and accurate alternative or adjunct to conventional techniques for detecting breast tumors."

Photoacoustic imaging techniques are currently generating a great deal of interest, as demonstrated by the keynote address delivered at SPIE Photonics Europe by PA-pioneer Lihong Wang of Washington University in St Louis.

The technique exploits the high degree of contrast in near-infrared light absorption between benign and malignant tissues. Light at 1064 nm can penetrate deep into breast tissue, but with lower scattering and absorption than other wavelengths. Hemoglobin absorbs light at this wavelength, and the contrast between healthy and malignant tissues observed in this study is caused largely by the increased hemoglobin concentration in malignancies, where the formation of new blood vessels is underway.

In PA imaging, nanosecond-pulsed laser light induces ultrasound transients, ie. an acoustic signal, through a thermoelastic mechanism caused by the slight increase in temperature of the absorbing molecule. The resulting pressure wave propagates to the surface where it is detected using wideband ultrasound detectors, and processed into an image.

Since the detected signal is not the highly scattered light, but rather the much less scattered ultrasound, the resolution of PA imaging can be superior to that of pure optical techniques. 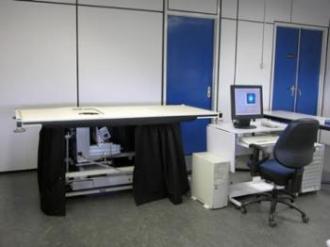 Twente photoacoustic mammoscope
The photoacoustic instrument used by the Dutch team has been under development at Twente since 2007. It is built into a hospital bed on which the patient lies face-down, and illuminates the breast with a Q-switched 1064 nm Nd:YAG laser delivering 10 nanosecond pulses at 10 Hz.

Results from the trials indicate that the imaging resolution of the PA technique using this apparatus was 3.5 millimeters in both axial and lateral dimensions.

In his Brussels keynote, Wang mentioned screening for breast cancer as a candidate for early clinical application of the PA technique. He noted that the technique was in the process of migrating into clinical trials, and the Dutch study confirms that this is indeed underway,.

"The photoacoustic mammoscope needs some technical improvements before it is a really valuable clinical tool for diagnosis or treatment of breast cancer, and this study also showed some possibilities for modifications," said Twente's Heijblom. "Our next step is to make those improvements and then evaluate less obvious potential tumors, benign lesions, and normal breasts with it."