In the third of a series of articles from this year's Directed Energy Systems 2012 conference, optics.org reviews the Institute Saint Louis presentation on the threat posed by enemy anti-aircraft actions and how they could be countered by “jamming and damage” lasers.

Von Salisch - exemplifying the increased European input into this year's event - considered the types of threat that could be countered by “jamming and damage” lasers. He also made a comparison of so-called “classical” military lasers with newer, smaller scale solid-state lasers and their potential adaptation to airborne platforms for operational use. He discussed different concepts of solid-state laser in the 2 micron range for jamming and damage, which are under investigation at ISL.

Looking at the current geo-political situation and its consequences for military technology, especially aircraft (which he usually referred to as “airborne platforms”) von Salisch gave the conference his principle observations:

“Friendly assets are still under threat, and it is clear that laser-based damaging countermeasures are becoming relevant in defense applications. In the view of ISL, solid-state lasers remain a most promising solution. There are several new concepts and technologies coming into the market. And for cost and operational reasons, armed forces are still looking more for pragmatic solutions than for sophisticated solutions.” 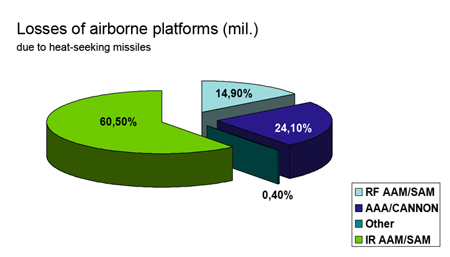 He then considered the nature of threats against “mobility assets” – airborne platforms and other equipment and systems of friendly forces, as well as civilian aircraft.

Von Salisch was considering not just regular military opposition but also that of terrorist groups, some of which he named and detailed in relation to their believed or proven weapons capabilities. “Different MANPAD [man-portable surface-to-air missile] classes are available on the black and grey markets. The following groups have access to different combinations of these anti-aircraft weapons: Chechen rebels, Taliban, Tamil Tigers, Hezbollah, FARC and Al Qaeda.”

Besides basic aircraft defense technologies such as the basic but sometimes effective dispersal of metal foil strips to confuse missile guidance beams directed by hostile forces, there are more sophisticated laser based jamming and damaging systems, which are at the core of von Salisch’s team’s work.

“The key requirements for a jamming or damaging laser include the following: almost instant emission; the capability to lock-on and irradiate a hostile source long enough to achieve “optical break lock”; an average power of at least a few watts; a beam divergence that should match the pointing characteristic of the seeker; and high tunability to cover seeker diversity.”

Von Salisch then described some of the ongoing work at the ISL, based in Saint-Louis, France. “There are four main activities at my division of the Optronics, Laser, Sensors division: Laser applications, directed photonics and quantum electronics, active imaging, and signal processing."

Laser applications include interactions between lasers, materials and sensors, protection against the effects of lasers (such as IED neutralization by lasers) and applications of femto-second lasers. Directed photonics and quantum electronics includes jamming and damage lasers for optical channel modulators, pulsed lasers with high repetition rate based on thulium and holmium doping, and OPO or Raman converter as well as eye-safe fiber lasers.

He said, “At ISL we are currently looking at using a frequency-converted wavelength generally because of transmission restrictions caused by atmospheric conditions around an airborne platform. The most promising systems we have found so far are ZGP (Zinc-Germanium Diphosphide single crystals are the highly-effective non-linear optical material for the middle IR and Terahertz range) and GaAs, especially in a Holmium SSL-Pumped GaAs OPO.”

ISL has been evolving a 2 micron source designed for laser damage of enemy airborne platforms / missile transmission and management systems. Early designs in 2009-2010 were based on Tm:YAG MOPA and Tm:YLF w. IC Ho:YAG but were not considered to be effective. However the latest iteration is a Ho:X (holmium-based) MOPA , which looks “promising”. 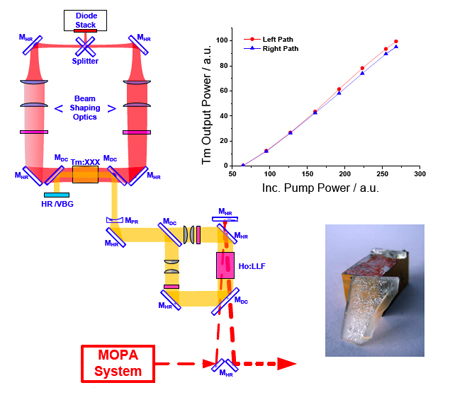 The MOPA concept features an independent oscillator / amplifier arrangement, allows variable scalability of “damage behavior”, delivers a high beam quality with nearly all of the Tm pump being utilized. The holmium-LLF crystal, based on LuLiF4, offers some advantages: larger crystal field splitting than Ho:YLF; lower reabsorption; and it is easier to grow than YLF.

As a further damaging laser alternative design, there is also the ME-SSHC Damage Laser, which features: diode pumped Er3+ rod (delivering up to 12kW@1.5 μm), scalable high-current pulse generator, a quantum efficiency > 80%, emission at around 1.6 μm , and atmospheric transmission > 98% at 1 km.

About the Institute Saint-Louis

Fundamental Research on Defense and Security

The French-German Research Institute is a bi-national institution established by the Federal Republic of Germany and the French Republic on the basis of a treaty signed in 1958. The original mission of the ISL was: "Research, scientific studies and basic predevelopment in the armament domain".