Fianium, Laser Quantum and Edinburgh Instruments among the latest winners for innovation and enterprise. 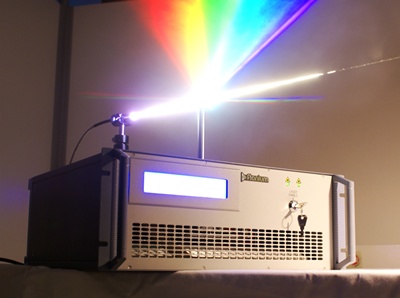 More than ten UK firms either developing or using optics and photonics technologies have won recognition for innovation and international trade in the 2012 Queen’s Awards for Enterprise.

Timed to coincide with the Queen’s birthday each year, the awards are based on the recommendations of an advisory committee, and recognize UK companies for high and growing levels of exports, innovation and sustainable development.

This year, winners include the fiber laser developer Fianium in the innovation category, as well as Edinburgh Instruments and Laser Quantum for international trade. Among the other winners using photonics technology are Renishaw, ACDC LED, Nanosight and Infrared Integrated Systems.

Supercontinuum coming of age
Fianium’s award relates specifically to the development of supercontinuum fiber lasers, the light sources that, unlike most lasers, are able to emit over a huge range of wavelengths.

Fianium has been developing the supercontinuum source since 2004, since when the output power has increased by an order of magnitude. Over the past eight years the company estimates that at least 1000 of the products have been installed around the world by it and rivals such as NKT Photonics and Leukos combined.

Anatoly Grudinin, Fianium’s managing director, commented: “The Queen’s Award for Enterprise is widely regarded as the highest honor that can be bestowed upon a British company and is the UK’s top award for business performance. Receiving this accolade is a well-deserved reward for our talented team’s hard work and dedication over the last eight years.”

The majority of supercontinuum sources are used in academic research. One high-profile customer has been Stefan Hell from the Max Planck Institute for Biophysical Chemistry in Göttingen, Germany. Hell initially used a Fianium source to develop the stimulated emission depletion (STED) microscopy technique that produces images at a resolution beyond the optical diffraction limit, and which can directly image structures as small as a brain synapse.

Commercial potential
Leica Microsystems is now working to commercialize a time-gated version of STED that also uses supercontinuum lasers, but a much larger market for the light sources could be opened up if the cost of the technology can be driven below the $10,000 mark, and rival more conventional broadband lamp products. Thanks to sustained advances in ultrafast fiber laser technology, that now looks possible.

One existing example of an industrial application is the supercontinuum spectrofluorimeter – which fellow 2012 Queen’s Award winner Edinburgh Instruments has been selling since 2007.

The photonics instrumentation and sensor specialist won in the “international trade” category, which recognizes a three-year period of sustained export growth. Edinburgh Instruments’ CEO Alan Faichney said: “Our success can be attributed to the specialized skills and commitment from the entire team at Edinburgh Instruments, who have the vision to design and create our wide range of photonic and sensor products used in research and industrial facilities across the globe. This Queen’s Award belongs to them.”

An early developer of laser technology, Edinburgh Instruments now employs 70 people, and says that its revenues should reach £9.5 million this year – a figure that would represent a 16% increase on 2011 sales.

Laser Quantum, which specializes in diode-pumped solid-state lasers, was another to win in the international trade category. Founded in 1994, the company sells a range of lasers for applications in medicine, aerospace and scientific research, and also has offices in San Jose, California.

Other 2012 Queen’s Award winners with photonics-related technology are listed below. The full list of winners is available here: