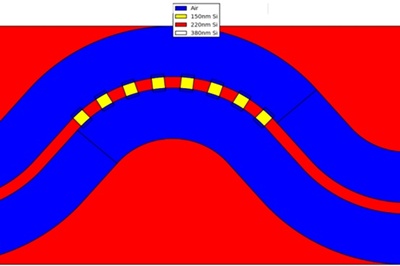 The source code for an advanced software platform used to design complex photonics circuits is being released on an open-source basis, in a move designed to speed the development of integrated photonics.

Ghent University and the semiconductor development institute IMEC, both based in Belgium, have been working on the “IPKISS” platform for a decade. Initially developed for silicon photonics, it is said to have a wide field of application in wafer-level photonics and beyond.

IPKISS (named after the Stanley Ipkiss character played by Jim Carrey in the film "The Mask"), is now available under three different source code licenses. The three licenses include a “community” version that allows anybody access to the platform free of charge (known as a 'GPLv2' license). Other options include a custom “developer” agreement that allows a licensee to develop plug-ins and add-ons for distribution, and a “custom commercial” version that is aimed at software developers looking to incorporate IPKISS into a product.

Component library
The software allows designers to define all manner of photonic components, such as light sources, photodetectors, splitters, modulators, filters and waveguides, very quickly from a library of developed code. Circuit designs based on the combinations of components can be directly simulated in electromagnetic solvers, and then integrated in a circuit on a photomask for wafer fabrication.

IMEC’s Pieter Dumon, part of the IPKISS development team and the ePIXfab European project that offers a silicon photonics foundry service, told optics.org at SPIE's Photonics Europe exhibition that the free version of the source code includes a basic library of standard building-block components that are highly complex to design from scratch – meaning that users can easily experiment with circuit designs and speed their development.

He stresses that IPKISS is not intended to compete with commercial software platforms from companies such as PhoeniX Software, even though IPKISS is more advanced and offers a more powerful platform.

Written in the widely-used Python language to allow standard scripting, IPKISS is also designed to be highly compatible with other photonics software, such as the free “Meep” platform for modeling electromagnetic systems developed at Massachusetts Institute of Technology, as well as commercial offerings.

Dumon says that around 40 research groups – including some from the commercial world - have been evaluating the open-source license, which he describes as a “parametric cell engine”.

Over the next year, ePIXfab will be developing design kits that will be needed for silicon photonics to truly emerge as a viable commercial technology that is compatible with volume wafer fabrication.

The release of IPKISS in an open format is intended to speed up wider development of the technology by creating a larger community of researchers working on it, while the IPKISS web site will also feature an online forum to help answer questions from those interested in using the code.

• The open-source version of IPKISS is available now from the web site www.ipkiss.org.