The European Commission will not be funding many “science for the sake of science” photonics projects in Horizon 2020. 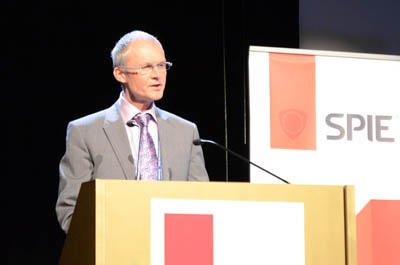 The precise details of the European Commission’s (EC’s) “Horizon 2020” innovation platform may still be somewhat hazy, but one message is becoming clearer: those in the photonics sector who are hoping for EC funding from 2014 onwards will need to convince Brussels of the wealth- and job-creating potential of their ideas.

Horizon 2020 – and what it will mean for photonics research, development and innovation (RD&I) in Europe through the remainder of this decade – was a major theme resonating through last week’s SPIE Photonics Europe event in Brussels.

Indeed, one of the co-chairs of the conference, which attracted more than 2000 attendees (up 6% on the last event, in 2010), was Ronan Burgess - deputy head of the EC’s photonics effort. It was Burgess’s colleague Thierry Van der Pyl, director for components and systems within the EC’s information society and media division, who kicked the event off in an address to a packed auditorium.

New state aid rules required
As the former CNRS researcher outlined, the EC is pushing for a substantial increase in RD&I funding for the 2014-2020 budget period. At €80 billion, the Horizon 2020 plans would account for 8% of the EC’s total spending.

The new budget and allocation of Horizon 2020 funding is yet to be ratified by the European Parliament and by the various member states, but by all accounts there is a political consensus to spend more on RD&I. Now more than ever, perhaps, politicians need to be seen to be creating jobs – and this will represent a key feature of future photonics funding in the region.

Under the EC’s proposals, the innovation will have as much to do with business as technology. Plans include adjusting the lending activities of the European Investment Bank Group to improve access to venture capital for small and medium-sized enterprises (SMEs) and for the five key enabling technologies (KETs) – of which photonics is one. Innovation-friendly public procurement will also be used as a key launch pad for businesses.

Van der Pyl pointed out that the EC and the EU will not be able to tackle that challenge alone, and that national and regional activity would need to be closely aligned. Moreover, he said, industry will have to play a key role, by “committing to investing and creating jobs in Europe”.

Both Van der Pyl and Burgess, who presented a similar talk at the Photonics Europe industry session last week, made clear that the addition of an “I” for “innovation” to the more familiar “R&D” is intended to reflect a more business-focused plan of action. The “I” could just as easily stand for “industry”.

Partly because of what will be a much closer relationship with business, new rules on state aid will also need to be drawn up, with the entire RD&I state aid framework set to be revised next year.

$300 bn market - and growing
Photonics is, of course, a major European industry already. Estimates from the EC and SPIE suggest that companies in the region claim around one-fifth of what is now a global market worth some €300 billion globally - and could be worth double that by 2020. However, the largest single chunk of that total (approximately one-third) relates to displays, and is utterly dominated by Asia – despite much of the underlying technology having been developed in Europe initally.

Europe’s politicians and bureaucrats are desperate to avoid any repeat of that scenario, and to ensure that technological developments made through centrally funded programs in Horizon 2020 turn into commercially successful products, jobs and wealth creation.

So, although a large slice of the Horizon 2020 budget will still go towards pure science, in more applied areas like photonics there will be a much stronger emphasis on solving what are seen as the “grand challenges” of European society, and contributing to economic growth.

Burgess said that photonics will not be funded on the basis of “science for the sake of science”. He explained that the information and communications technology (ICT) budget, which is the most relevant pot of funding applicable to photonics (although by no means the only one), will be part of the €18 billion allocated to “industrial leadership”. As things stand at the moment, ICT is in line for an €8 billion of that, of which €1.8 billion is earmarked for microelectronics, nanoelectronics and photonics.

Beyond technology "silos"
Burgess added that there had been “a lot of progress” made towards establishing the key objectives for a public-private partnership (PPP) dedicated to photonics as part of the Horizon 2020 efforts. He said that the PPP’s focus would not relate to specific technology areas in the way that project funding typically has in the past, with the emphasis instead on economic growth, job creation and entrepreneurship.

“[We need to look] beyond technology silos, to establish links with end users, stimulate skills in schools, and be ambassadors for photonics,” he said. That echoed Van der Pyl’s opening address, which suggested that the PPP could stimulate private-sector RD&I investment with a “business-driven agenda” to accelerate photonics technologies. 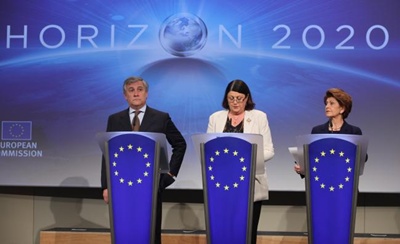 Burgess appeared confident that the PPP would get the green light once some firm decisions on Horizon 2020 had been made. The next key development should be in November 2012, when the European Parliament is expected to ratify the EC’s proposal. Assuming that this goes ahead as planned, more details of the PPP should be unveiled in the first half of 2013.

By then, the current Framework Programme 7 (FP7) will be in its final year. Burgess said that for photonics, the final work programme under FP7 will have a strong focus on “innovation and deployment”. Although the specific details are not yet decided, strong themes are likely to include support for open innovation and SMEs, as well as pilot projects in solid-state lighting, and showcases for biophotonics applications, where there is a perceived need to overcome end-user conservatism.