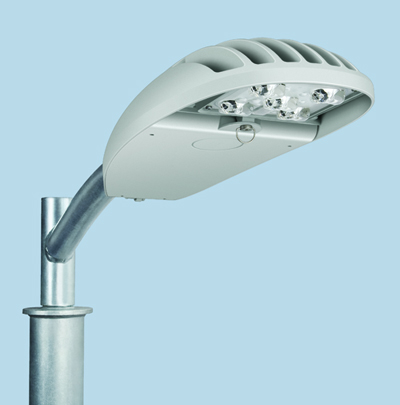 Cree has announced that its XSP Series LED street lights represent a “breakthrough innovation” in street lighting. They lights are the most affordable and efficient LED-based sources that Cree has yet developed – offering a rapid return on investment for municipalities.

Cree says its engineering developments have improved optical efficiency by 15 percent compared to previous generations of its LED street lights and it has also reduces the number of LEDs used by more than half without sacrificing application performance. Fewer LEDs mean lower luminaire costs and faster payback for customers. Its proprietary NanoOptic Precision Delivery Grid optic technology efficiently delivers light to the street – “making communities appear cleaner and safer”, the company claims.

The XSP Series was designed to deliver imporved overall system efficiency of up to 100 lumens per watt and is designed to provide an L70 lifetime of more than 100,000 hours (in most LED general lighting applications, the industry uses a measure of 30 percent lumen depreciation as the generally acceptable level; the expectation is that LED lighting should have 70 percent of lumen maintenance over a defined period of time – represented by the symbol L70).

Christopher Ruud, vice president and general manager, Cree lighting, commented, “The new street light delivers municipalities up to twice the lumens per dollar compared to previous generations and can pay for itself the first time a city avoids having to send a crew and truck to replace a bulb.”

“The XSP Series is a leap forward in outdoor lighting and is made possible by innovation in every aspect of the product. Capitalizing on innovations in Cree LED chips and components, optic technology and design, and overall luminaire design, the XSP Series exemplifies the best of Cree integrated technology.”

• Cree also reported that it had broken its own record for white LED efficacy, with a 254 lumens/watt performance at a color temperature of around 4400 K. That beats the previous best of 231 lumens/watt for a research-level device.