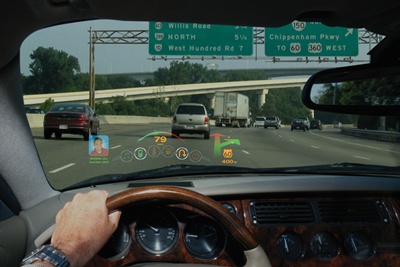 Laser projector developer MicroVision has agreed a licensing deal with Pioneer that allows the Japanese electronics company to make head-up displays (HUDs) based on MicroVision’s technology for the automotive market.

Under the terms of the agreement, which is an extension of an existing relationship between the two companies, Pioneer will also manufacture display subsystems and supply them to MicroVision for various consumer and industrial applications.

Pioneer says that it plans to release its first HUD for the automotive market, where it is seen as a leader in GPS navigation technology, by the end of this year. It will pay the US firm a royalty from sales of the products.

The agreement follows MicroVision’s decision to transition to what it calls an “ingredient brand model”, in other words a licensing model for high-volume applications that will enable it to reduce costs. That is important, because MicroVision has a history of making substantial losses. In 2011, it posted an operating loss of $36 million on revenues of just $5.6 million.

The company has an equity financing agreement in place to access cash, and with only $13.1 million in cash and equivalents on its balance sheet as of December 31 2011, it looks likely that this source will need to be tapped again soon.

Green lasers
Crucially, MicroVision’s next generation (“Gen2”) of high-definition displays are set to incorporate direct-emitting green laser diodes instead of frequency-doubled infrared emitters – a switch that should make for far more compact, efficient and vivid displays. The trouble is that no such green lasers are yet available in large commercial quantities and at an acceptable price for consumer electronics applications.

But according to CEO Aleksander Tokman, that situation is about to change. He expects one supplier to release devices by the end of the current quarter, with two more to follow by the end of this year. The emergence of multiple suppliers ought to push down prices significantly, and cannot come soon enough for MicroVision.

Masanori Kurosaki, who heads up Pioneer’s car electronics business, emphasized the importance of the devices in a joint statement with MicroVision, saying: “We are pleased to have formalized the next step in our collaboration with MicroVision to manufacture, distribute and supply the PicoP technology using direct green lasers, which we expect to be available soon.”

At least five key manufacturers are working on green laser diodes, devices that are intrinsically more difficult to fabricate than similar red and blue lasers because of a phenomenon known as the “green gap”, which relates to the electronic bandgap of the compound semiconductors on which laser diodes are based.

Road safety
Long-time gallium nitride pioneer Nichia, as well as Germany’s Osram Opto Semiconductors and the US start-up Soraa – which was founded by the well-known former Nichia employee Shuji Nakamura – are leading the race towards producing the green diodes in volume, and it is likely that one of these suppliers will be first to launch a suitable product.

“With the expected availability of direct green lasers in the second quarter of this year, solid technical progress by both of our teams, and the completion of these business arrangements, we are on track with our plan to make available our PicoP Gen2 display technology this year,” Tokman said.

MicroVision’s technology largely revolves around a bidirectional, single-mirror MEMS scanner – essentially a silicon chip with a small mirror at its center – that can be flexed horizontally and vertically to reproduce an image. According to the company this design requires relatively simple optics, and yields particular advantages in terms of the compactness of its display engine.

For automotive head-up displays, where the projection of dashboard and navigation information onto the windshield is deemed to be safer as it does not require a driver to take his or her eyes off of the road ahead, this means that HUDs can be customized more easily for different car models. The high contrast possible with a green laser also means that this kind of display can function much more effectively in daylight as well as for night driving.