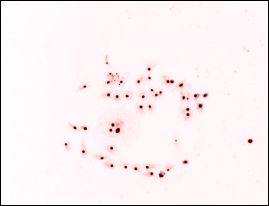 Photodynamic therapy (PDT) is a potential treatment regime for a number of conditions. It involves introducing particular light-sensitive chemical species into biological systems, inducing them to localize at the point of interest, and then irradiating them with a light source.

It holds particular promise as a treatment to combat certain cancers, and the latest results from trials using a system developed by Ontario-based Theralase have shown that PDT was able to completely destroy subcutaneous colon cancer tumors in a mouse model. Four weeks after treatment, the mice remained free of cancer.

"The achievement of this important milestone signifies that Theralase's leading drug candidate is effective in the destruction of cancer in a live animal model and can prevent the cancer from recurring," commented Roger White of Theralase. "We are confident that Theralase is well positioned to expedite the required steps to initiate human trials in the near future."

Those trials could begin as soon as next year. White envisages a clinical road map in which a three-stage program of FDA-moderated human clinical trials could start in 2013, and be completed in 2019.

Theralase is a developer of FDA-approved therapeutic medical lasers for treatment of chronic pain, neural muscular skeletal conditions and wound care. But alongside work in these sectors, the company has also patented light-sensitive photodynamic compounds (PDCs) for use in PDT.

"The company first entered the PDC space a little less than eight years ago, when it licensed some PDCs from a university researcher, and has been working on developing them since then," White told optics.org. "Theralase is expert at designing, manufacturing and distributing medical laser systems; our PDC researchers are experts at designing and synthesizing PDCs; and colleagues at Princess Margaret Hospital, home of the Ontario Cancer Institute, are experts at testing our PDCs and lasers through in-vitro and in-vivo pre-clinical and eventually clinical models."

Despite its simplicity in principle, PDT is not a trivial operation. The treatment is thought to work when the photosensitizer in the tumor absorbs the light and produces an active singlet-state oxygen molecule, an aggressive species which reacts with and kills the tumor cells.

But arranging for suitable PDCs to be present and localized in a tumor without being dealt with first by the body's own immune system is a challenge. In addition, only recent developments in endoscopic light-delivery systems have made subcutaneous tumors realistically treatable, and also broadened the range of potential wavelengths and matching photosensitizers.

"The wavelength of the source is of course critical, as are the average power, peak power, frequency, fluence and fluence distribution," noted White. "Some of the laser sources used in the research are proprietary to Theralase, and have been custom designed to match the characteristics of the PDCs and hence optimize activation."

The two apparently disparate sectors in which Theralase now operates are not so different for the company, according to White, who believes that the expertise gained should stand Theralase in good stead for continuing moves in these and other markets: "The therapeutic market and oncology market are two different animals; however, our experience in working with the medical community prepares us to work in the various disciplines of medicine."