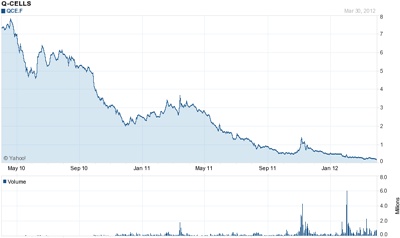 Q-Cells, until relatively recently one of the world’s leading producers of photovoltaic cells and modules, is to file for bankruptcy on April 3, after a recent court ruling made its planned restructuring unworkable.

The Bitterfeld-Wolfen firm, which has some 2200 employees, had been facing unaffordable repayments to its bondholders, but under a restructuring “validated” by management consultancy McKinsey it had planned a debt-for-equity swap in a bid to remain solvent.

That plan had involved reducing the capital owned by current shareholders to only 5% of the company, with the precise details of the bondholder agreements due to be thrashed out over the next few months. A majority vote by bondholders had deferred the maturity of the first convertible bond, originally due on 28 February, to 30 April – in order to prepare for the implementation of the restructuring.

But not all bondholders had signed up to the proposed restructure, and after a ruling by the Frankfurt Higher Regional Court in a similar case last week, Q-Cells said that the company could no longer be regarded as a going concern, and that it needed to look at alternative options.

“Following an intensive review of alternative concepts for the implementation of the financial restructuring, the Executive Board has reached the conclusion that a going concern of the company cannot be restored on a sufficiently secure legal basis,” read a Q-Cells statement. “Therefore the filing for insolvency proceedings is legally necessary. The Executive Board and the preliminary insolvency administrator will work together to secure the continuity of the company within the insolvency proceedings.”

Pleiderer case
Matters had come to a head after the appeal court in Frankfurt ruled in what is known as the “Pleiderer” case. Q-Cells said that the outcome effectively revoked the basis upon which the bond restructuring has been based, according to the 2009 German Bond Law.

Though Q-Cells thought that the verdict reached was incorrect, it would have faced potential lawsuits along the same lines and in the same court, and it would be highly unlikely for the court to change its views on the matter.

Ironically, the Pleiderer ruling was made on March 27, the same day that Q-Cells’ management team published full-year results for 2011, in which they said that “significant progress” had been made with their proposed restructure to save the company.

In those results, CEO Nedim Cen had said that the two years spent working to realign the Q-Cells business on a sustainable footing had begun to bear fruit. Nevertheless, the precipitous falls in the prices of PV cells and modules last year saw the firm post a net loss of €846 million, and close out the year with net debt of €432 million and cash holdings of “only” €305 million.

With the company in negative equity and bond refinancing impossible, restructuring or insolvency had become the only choices facing Q-Cells.

At an extraordinary general meeting held on March 9, Q-Cells’ management had said that in the event of an insolvency, creditors would probably receive 20% of what they were owed, but that shareholders would receive nothing as they would only be entitled to what remained after all creditors had been paid in full.

After the Frankfurt ruling made the preferred restructuring option impossible, insolvency became the only option remaining.

• According to reports, Q-Cells is not the only German solar company facing bankruptcy this week. The CIGS thin-film cell manufacturer Odersun, which employs 260 people, is also reported to be trying to find a buyer after negotiations with foreign investors fell through.