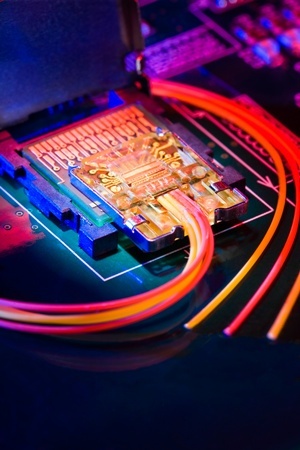 The Sumitomo Electric subsidiary will pay $17 million in cash for fixed assets including the VCSEL fab, as well as inventory and intellectual property relating to the VCSEL-based product lines. That includes not just the laser chips, but also photodiodes, parallel optical transceiver modules and active optical cables.

SEDU said that it planned to continue running the VCSEL fab operations in Albuquerque, but that the related enterprise engineering team in Newark, California, would be relocated and consolidated at SEDU's nearby San Jose headquarters.

According to Emcore, the VCSEL-based product lines contributed around 5% of the firm’s fiscal 2011 sales, equivalent to approximately $10 million.

The company adds that the deal will help to simplify its operating structure and reduce fixed costs, but perhaps more important right now is the boost that the sale will provide to Emcore’s cash position.

That took a hit last year following the impact of the Thailand floods on Emcore’s contract manufacturing partner Fabrinet, although it has since been improved thanks to the receipt of customer pre-payment deposits for products in the most recent financial quarter, as well as salary cuts.

"Strategic decision"
Hong Hou, Emcore’s CEO, said in a statement: “The decision to sell the VCSEL-based product lines is strategic and market-driven. The proceeds from the transaction significantly improve our balance sheet and the sale is expected to reduce the time to reaching profitability.”

SEDU emphasized the range of applications in which the VCSEL products are used, which include not just conventional communications but also rack-to-rack and board-to-board data links, as well as emerging uses in automotive markets.

Emcore did not quantify exactly how much the sale would save it in terms of its fixed and operating costs, but recent figures indicate that the company has some way to go before it will become profit-making. In fiscal year 2011 Emcore posted a net loss of $34.2 million on total sales of $201 million, while in 2010 the loss was $21.4 million on sales of $191 million.

But the fiscal 2011 performance was partly a result of the Thai floods, and Emcore is hopeful that a recovery from that, plus the manufacturing ramp of its China-based solar cell joint venture “Suncore” – recently in receipt of a 50 MW purchase order for a concentrating photovoltaics (CPV) plant in western China – will help to push its operations into the black.

The VCSEL unit sale to Japan-owned SEDU remains subject to regulatory approval by the Committee on Foreign Investment in the US (CFIUS). Two years ago, Emcore had fallen foul of CFIUS when its original plan to set up a solar cell joint venture in China to be majority-owned by the Tangshan Caofeidian Investment Corporation was scuppered.

CFIUS ruled out that deal on the grounds that it represented a threat to US security, but the less-sensitive nature of the VCSEL business and the friendlier relations between the US and Japan ought to ensure that this latest deal is completed shortly.