Imaging muscle cells on the mend

A new technique visualizes the muscle repair process while it is under way inside a living organism. 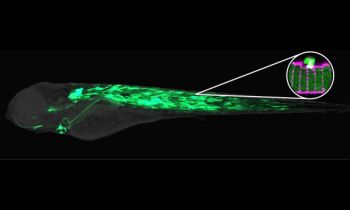 Muscle cells have very efficient systems for repairing themselves, and these mechanisms are in regular use. Even everyday activities can readily tear tiny holes in the plasma membranes of the cells.

But observing that repair process directly and discovering which factors can help or hinder it is not straightforward, not least because the first stages of the repair operation take place very rapidly.

A team from Karlsruhe Institute of Technology and Heidelberg University, Germany, has now successfully observed real-time membrane repair in a living organism for the first time.

"It has been very difficult to study this process," commented team member Urmas Roostalu. "The natural resealing of the membrane occurs very fast - as it needs to do in order to stop efflux of cell cytoplasm and influx of calcium ions, and for the repair process to be efficient. Studying muscle cells in in-vivo experiments is not straightforward."

The team's solution involved the use of tagged fluorescent proteins, and the deliberate creation of minor muscle damage in zebrafish larvae using a laser. As well as possessing muscle cells similar to those in human beings, zebrafish larvae also happen to be optically transparent. Using a fluorescence technique allowed the team to directly observe the movements of specific proteins within the organism.

"We targeted a red fluorescent protein to the cell membrane, enabling us to visualize it throughout the damage response," explained Roostalu. "At the same time we tagged various muscle proteins with green fluorescent protein, to demonstrate their movements in the injured myofibre. This approach let us characterize the intracellular distribution of a large number of proteins and demonstrate their kinetics."

Two-photon laser
The muscle damage itself was created with a precise impulse from a two-photon laser set at 822 nm, which made tiny holes in the plasma membrane of the muscle cells. Following the subsequent movements of the tagged fluorescent proteins allowed the repair mechanism to be visualized as it occurred.

Among other findings, the team were able to confirm the importance of a protein called dysferlin to the process.

"Dysferlin deficiency is already known to be related to human myopathies," noted Roostalu. "We found that cell membrane repair relies on dysferlin and annexin A6 proteins, which generate the primary patch at the site of rupture. We also saw that dysferlin arrives at the site of lesion on the surface of specific membrane compartments, that originate from other parts of the cell membrane. And we could show that the repair patch has a layered structure, where the addition of one layer depends upon the proper assembly of the previous one."

There is still plenty of scope for future developments of the technique, including improvements to the resolution achieved. One avenue could be the establishment of a large-scale drug screening program, where the membrane's resealing capacity could be studied after treatment with various chemical compounds. This might identify compounds able to enhance muscle recovery from damaging conditions, and perhaps help in the treatment of inherited myopathies.

"Although we now have a good overview of the functions of certain proteins in the maintenance of myofibre integrity, it would be most interesting to visualize the processes at the lipid level, to find out how various lipid compartments are fused together to seal the cell membrane rupture," said Roostalu. "To date only a few proteins that mediate the resealing process have been identified, while new biochemical and genetic screens are needed to identify dysferlin's interaction partners in damaged muscle cells. But once identified, these proteins could be studied in the zebrafish model to precisely define their function in the muscle cell repair process. It is rather amazing what it is possible to do with a conventional two-photon laser system and zebrafish larvae."