Tests alongside NASA's Operation IceBridge will help pave the way for similar systems to operate in orbit. 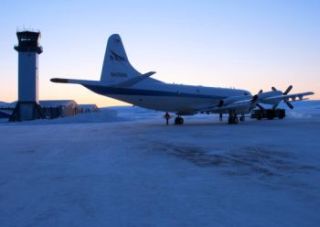 The Operation IceBridge project operated by NASA began its 2012 campaign last week, collecting ice elevation data in the Arctic and studying changes to the extent of polar ice coverage.

Alongside the array of sensing and measuring devices employed will be the MABEL platform - the Multiple Altimeter Beam Experimental Lidar.

Although MABEL is at an earlier stage of development than some of the other sensing technologies involved in Operation IceBridge, it will still be a focus of attention during the course of the mission.

A separate ER-2 aircraft carrying MABEL will shadow the progress of the main IceBridge aircraft, allowing the performance of the platform to be assessed and compared with that of the other systems.

"The instruments flying on the other aircraft are more mature than MABEL," said assistant research scientist Kelly Brunt. "This will test MABEL's accuracy and help scientists develop better algorithms."

The significance of MABEL lies with the instruments that could follow it, specifically systems intended to fly into space on NASA's planned ICESat-2 satellite.

That mission aims to be carrying the Advanced Topographic Laser Altimeter System (ATLAS), an instrument that will be based around a green 532 nm laser. The principle involves splitting a pulsed beam into nine individual sub-beams, switched at a repetition rate of around 10 kHz. From the satellite's orbit height of 600 km, the laser pulses will take around 4 ms to make the round trip to the surface of Earth and back again. Using multiple beams improves the quality of sampling, particularly in areas of uneven terrain.

The keys to photon counting are the very sensitive detectors capable of detecting individual photons, and the precise timing of photon travel. Photons reflected from mountains return sooner than photons reflected from valleys, allowing scientists to measure the elevation of Earth's surface. NASA believes that a photon counting technique could allow ICESat-2 to resolve elevation differences of 10 cm or better over most surfaces.

MABEL is intended to help prove the technique's viability. A micro-pulse multi-beam photon-counting altimeter represents a new approach to space-borne altimetry measurements, so MABEL will be used to validate instrument models, and to help assess how atmospheric effects may perturb the measurements.

Given that the technology associated with ATLAS is, by the NASA team's own description, relatively new and untested, such assessments of the principle will be essential. Operation IceBridge runs until mid-May 2012, and with ICESat-2 currently scheduled for launch in early 2016, MABEL's performance will be keenly watched.