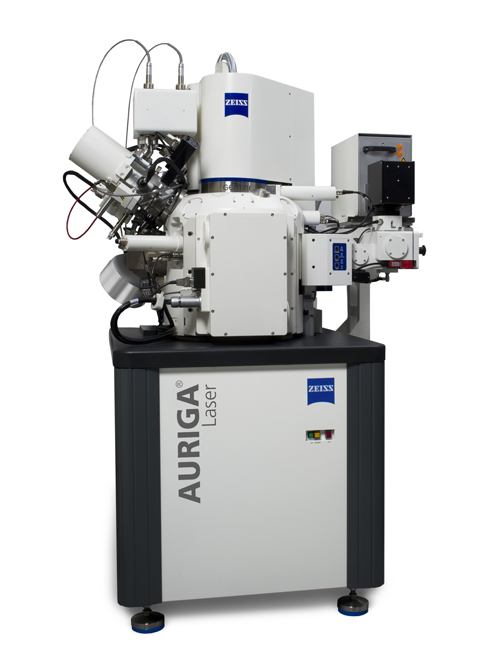 Auriga: FIB-SEM and ablation in one.

Carl Zeiss has launched the Auriga Laser, which combines the features of the Auriga CrossBeam FIB-SEM (Focused Ion Beam-Scanning Electron Microscope) workstation with the capabilities of a pulsed micro-focus laser for fast ablation of material samples. The key laser component is a nanosecond pulsed, diode-pumped solid-state 355nm laser from Trumpf AG.

Mechanical ablation and cross-sectioning of large material volumes often cause deformations, making a sample unsuitable for further examination. In contrast, applying a focused ion beam is inefficient, because the process is much too slow

When designing its new laser, Zeiss determined that ablation with a pulsed micro-focus laser beam would offer clear advantages: it does not damage the sample, and it enables ablation rates comparable to mechanical removal.

Dr. Martin Kienle, Director CrossBeam product line at Carl Zeiss, commented: “Our Auriga laser is the first such instrument on the market. We believe it is a milestone because it simplifies the SEM examination of a wide range of innovative materials and structures, overcoming the limitations of conventional preparation methods.

"This laser system enables users to carry out new applications and to examine complex structures such as next-generation nanotechnology processors or flexible thin film solar cells.”

The scanning laser used in the Auriga laser is a nanosecond pulsed, diode-pumped solid-state laser operating at 355 nm provided by Trumpf, in Ditzingen, Germany. It was chosen from a broad range of different types of lasers in order to optimally meet the demands of preparing structures for SEM examination.

In cooperation with Carl Zeiss, researchers from the Fraunhofer-Institute for Non-destructive Testing (IZFP) in Dresden, have optimized the workflow of the innovative tool — ease of use, fast transfer procedures and fast relocation of the region of interest on the sample under examination, took center stage in the cooperation.

In order to protect the Auriga FIB-SEM workstation and detectors from debris generated during the laser ablation process, the system is equipped with a separate chamber for laser operation. After preparing the structure of interest with the laser the sample is transferred under vacuum conditions to the main chamber for SEM examination or FIB polishing. Retrieving the target structure is achieved automatically.

The transfer is carried out quickly and smoothly in a matter of seconds — resulting in a very simple and continuous workflow. To achieve specific ablation patterns, the laser is equipped with CAD software controlling the scanner head. This enables the user to pre-define even highly complex patterns of the sample structure.