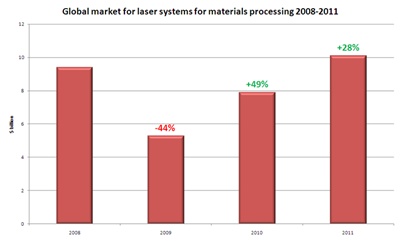 The annual market for laser systems used in materials processing applications has topped $10 billion for the first time, according to a new report from Arnold Mayer at Optech Consulting.

The analyst, whose reports are particularly influential within the European laser community, says that the market grew by a remarkable 28% in 2011, reaching $10.1 billion. That figure is easily higher than the $9.4 billion that the same analyst recorded in 2008, and represents much stronger growth in 2011 than Mayer had previously expected.

At the 10th International Laser Marketplace seminar, which was held in Munich in May last year, Mayer had suggested that the market would grow by at least 10% from the 2010 level of $7.9 billion, but the continued rapid rate of recovery from the severe downturn of 2009 appears to have exceeded even those expectations.

The pace of the recovery means that the market for industrial laser systems has almost doubled, in dollar terms, since 2009. Demand arising from the key Asian manufacturing economies of China, Korea and Taiwan are largely responsible, although Mayer also notes accelerating demand in India and even Brazil as industrial production in those emerging economies takes hold.

Around two-thirds of the market, or $7 billion, relates to systems used in “macro” processing – largely cutting, welding and marking – with the remaining $3 billion attributed to “micro” applications in semiconductor, flat-panel display, PCB and solar cell production.

2011 turned out to be a strong “up” year for sales of semiconductor equipment, although since the third quarter of last year the level of demand has dropped sharply. While the semiconductor equipment market remains in the doldrums for now, most manufacturers and analysts are pointing to an upturn starting sometime in the second half of this year.

Fiber and disks taking over
Mayer also points out how solid-state disk and fiber lasers are increasingly taking over from CO2 lasers as the sources of choice - except in cutting of thick metals.

“While not yet suited for all cutting applications, solid-state lasers lead to advantages mainly for cutting of thin metal sheets, [and] they are welcome in the market,” noted the analyst, adding that these lasers show typically five times the electrical efficiency of CO2 lasers.

He estimates that Trumpf, regarded as the world’s leading laser vendor by sales, now equips more than 10% of its sheet-metal cutting machines with disk lasers. Other systems vendors tend to equip their cutting tools with fiber lasers to a similar degree, the analyst adds.

“The breakthrough of the new lasers in high-power cutting comes many years after their success in welding, where fiber, disk and diode lasers already dominate the market,” Mayer writes.

The emergence of the fiber laser as a versatile technology platform that is suited to a wide variety of industrial applications was highlighted at the recent Photonics West 2012 trade show, where a number of laser companies were showing their intention to enter a market that is dominated by IPG Photonics.

Jenoptik and Coherent were among those showing prototype versions of 1 kW fiber lasers at the event, while Rofin-Sinar and the GSI Group company JK Lasers, which already have 1 kW versions, are working on reducing the cost of their technology and developing multi-kilowatt fiber lasers in a bid to catch up with IPG.

Meanwhile IPG is looking to new wavelengths, particularly around 2 µm, to further expand the market for fiber lasers. At this longer wavelength laser welding and cutting of plastics and other materials becomes possible, and this is seen as a key growth area.

New CO2 application?
While diode-pumped solid-state lasers of various kinds have taken market share away from CO2 lasers in recent years, one new application for the more traditional form of high-power lasers that may see a major boost this year is extreme ultraviolet (EUV) lithography.

EUV light sources under development at both Cymer and Gigaphoton rely on creating a plasma with a laser, and because of the sheer power needed, CO2 lasers are the sources of choice.

Speaking at Photonics West in January, Trumpf’s Peter Leibinger, head of the family firm’s giant laser business, said that Trumpf was working alongside Cymer and its key customer ASML on the technology, which could begin shipping to chip manufacturers in the second half of this year if the output power of the EUV sources can be scaled up in tandem with achieving the necessary reliability.

Because the conversion from laser energy into EUV power is extremely inefficient, the EUV sources that are designed for high-volume chip production will require at least 20 kW of laser input power per EUV scanner system – suggesting a significant new market for CO2 lasers if the approach is successful.