The 2013 International Consumer Electronics Show (CES) will see the launch of a new giant television based on laser projection rather than the traditional white lamp or LED backlight.

LG, the Korean electronics company, says that it will unveil the 100-inch screen at the Las Vegas event in early January. The 1080p high-definition TV is said to offer an “incredible” dynamic contrast ratio (quoted as 1 million-to-1) as a result of the laser illumination system.

"LG's 100-inch class Laser TV takes projection technology and makes it perfectly suitable for both the boardroom and the living room," said Havis Kwon, CEO of the LG Electronics Home Entertainment Company, in the company’s statement on the release.

"In the coming year, LG will continue to introduce innovative TV products to provide an outstanding productivity and entertainment experience for our customers."

"Uncanny" experience
Adding that the new TV would offer users an “uncanny theater-like experience at home”, LG stressed that it would not suffer from the drawbacks of tricky installation that have typically been a feature of earlier projector-based systems.

“A standard projector system requires a considerable distance from the screen to create a large image, and typically needs to be installed on the ceiling,” said the company. “However, LG's Laser TV makes installation and viewing easier by allowing users to place the lens a mere 22 inches (approximately 56 centimeters) from the screen, while having the flexibility to position it near the floor or fasten it to the ceiling.” 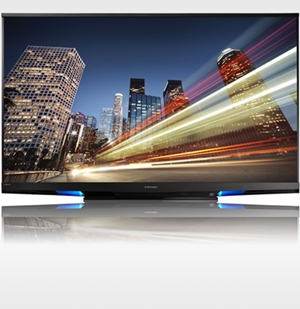 Early adopters will get a first look at the “Hecto” laser TV at the CES show, which starts in Las Vegas on January 8. Other innovations expected from the Korean displays maker are likely to include new large-sized organic LED TVs and passive 3D screens that require no glasses.

LG will not be the first company to try to wow the CES crowds with a laser projection TV: Mitsubishi Electric made a splash back in 2008 with its “LaserVue” and has since launched the technology commercially.

Since then, however, direct-emitting green laser diodes have become available, meaning that the illumination systems behind the advanced projectors can become far more compact and efficient.