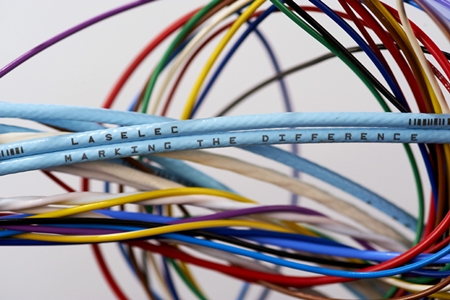 Top marks: Laselec has developed a marking method based on laser-marking.

Every time production begins on a new type of wire up to 1m can be wasted, which can lead to substantial costs - due to the high price of aeronautical wire, for example. Now UV laser systems developer Laselec has designed a new wire-marking system that it claim will significantly reduce waste in the wire industry.

The company has developed a marking method based on ULYS Modena wire markers and an automatic feeding system to reduce typical production waste from 1m to between 4 and 12 centimeters. The marking/cutting system can be mounted on both single-spool and multi-spool de-reelers and can also be retrofitted on all ULYS Modena machines.

Using UV lasers to identify electric wiring is currently a method in widespread use in both military and civilian projects, as it is a process that provides indelible marking without damaging the insulation, thanks to the machine’s robust and reliable wire de-reeling and cutting system.

The ULYS Modena UV-laser range meets all wire-marking requirements, from the ULYS 110, an entry-level machine suitable for low-production rates, to the ULYS 990, which has unmatched productivity, Laselec claims.

Groups involved in modification, maintenance and repair of aircraft are showing increasing interest in the technology. The MRO 200 was developed by Laselec to meet the needs of such aerospace companies. Aimed at small and medium-size production runs, the markers can also be used for rework.

The French-based company says its computer-controlled laser cable markers are easy to operate, reliable and efficient. The marking ranges are constantly evolving and have had new models added this year.

A key benefit of direct UV-laser marking is a reduction in the wiring weight, which subsequently reduces the weight of the wire-equipped devices, lowering users’ energy costs. Such wire marking is gradually replacing sleeving in the aeronautics industry. Laselec equipment is used by all of the main aircraft manufacturers, including Airbus, BAE Systems, Boeing, EADS, Embraer, Eurocopter, Northrop Grumman, Sikorsky and Westland Helicopters.

The rail industry has also begun using this equipment, including Canadian rail specialist Bombardier Transportation. Similarly, workshops for industrial vehicles, as well as those for upscale, “performance” and rally vehicles, feature such equipment.

In 2012, Laselec began to take part in VESUVE, a collaborative R&D project that aims to improve considerably the productivity of aeronautical cable production by developing the laser solutions of the future. VESUVE is happening in the framework of the French Government’s scheme known as the Fonds Unique Interministériel (FUI) and will be supported throughout by the European Regional Development Fund.

Laselec makes over 80% of its turnover outside its French homeland. Since 2004, the company has had great success in India, and in Japan where the company founded a support centre in 2011. In China, Laselec’s customers include Changhe Aircraft, Lode Technology and Shanghai Aircraft.