Japanese firm is first to receive clearance from Intel to make cables for 30 meter data transmission. 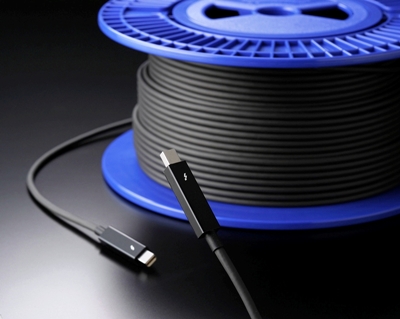 Designed to transmit data at a rate of 10 Gb/s over a distance of up to 30 meters between Thunderbolt-compatible devices – ten times further than the non-optical version - Sumitomo Electric has been sampling the cables since April 2012.

The Thunderbolt is the commercial name used for what Intel had originally called “Light Peak”, and can now be used to make a high-speed optical connection between a host computer and up to six other devices, in a “daisy chain” format.

The optical version follows the initial launch of a conventional copper-based Thunderbolt cable in 2011, and has the same 4.2 mm diameter. According to the Japanese firm, the optical fiber used is suitably robust for everyday use, even if tangled in knots and bent back on itself at 180 °.

Using two channels means that data can be transmitted at up to 20 Gb/s and the technology is compatible with both PC and Mac formats.

Although its data transfer speed is the same as the copper version, the key advantage of the optical cable is the distance over which it can deliver a high-speed connection - the longest copper-based equivalent from Sumitomo Electric transfers over only 3 meters.

There is a disadvantage with the optical version of the technology, however. Unlike the copper version, it cannot deliver electrical power to a peripheral device.

Thunderbolt is the result of several years of development at Intel, and forms a key part of the company’s strategy within optical technologies. One of the other key elements, silicon photonics, is at an earlier stage of development, with the company working on all-silicon high-speed data transmission systems and novel laser designs that combine III-V semiconductor materials with silicon device processing.

Earlier this month, rival chip maker IBM said that it had developed a sub-100 nm silicon photonics process – showing that the technology is compatible with standard electronics production methods and suggesting that it could be approaching a genuine commercial breakthrough at a top-tier semiconductor manufacturer.

Michael Hochberg, director of the US-based silicon photonics foundry OpSIS, told optics.org that the IBM work ably demonstrated the company’s commitment to silicon photonics, although he believes that multi-chip integration – rather than state-of-the-art electronics-like production methods – will usher in the development of better silicon photonics.

“I think what’s going to happen is that silicon photonics is going to end up looking a lot like analog electronics,” he said.